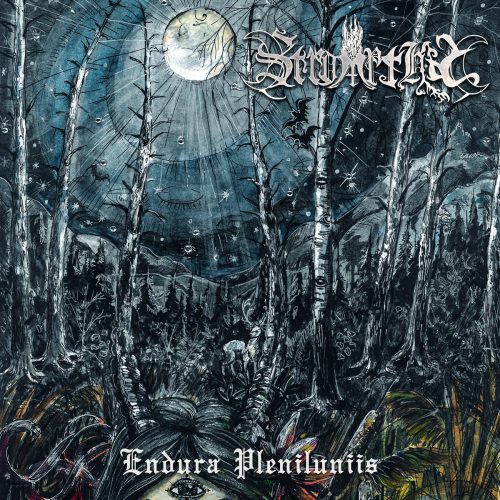 Those of us who have followed Icelandic metal (particularly black metal) have by now become used to seeing videos that incorporate that country’s dramatic and desolate landscapes, and the video we’re presenting today also features panoramas of equally dramatic and desolate terrains blanketed in snow and ice — but these scenes come from a different and lesser-known land. The video also includes a narrative, a surreal one in which a troubled man, hood up, searches for and encounters the undulating and eventually still form of a woman with roses for eyes.

The song accompanied by the video is also surreal and dramatic, one that creates an alchemy of differing ingredients — from atmospheric black metal to doom, from coldwave to industrial and dark folk — to fashion its own mysterious, dark, and desperate narrative. That song, “Brûle, Prairie De Roses“, appears on the new third album by Stromptha, which is the solo project vocalist/musician J, a native of Greenland who has returned there after a sojourn in France. Entitled Endura Pleniluniis, the record will be co-released by Satanath Records (Russia) and Pest Records (Romania) on March 24th. END_OF_DOCUMENT_TOKEN_TO_BE_REPLACED