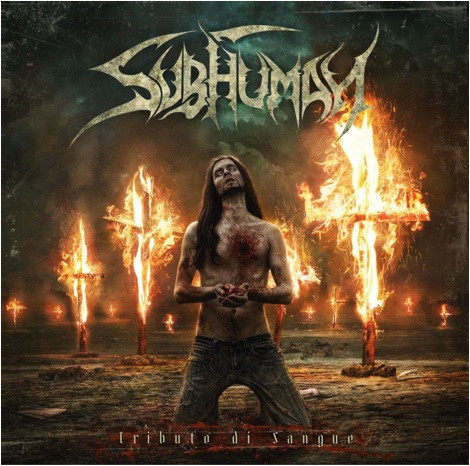 (After a scholastically forced absence from NCS, TheMadIsraeli returns with a review of the latest album by Italy’s Subhuman.)

Celebrate NCS readers. My time in the corrupt prison of academia is over.  I can write about shit that’s fucking metal again.

Subhuman are a somewhat long-running savage death-thrash band from Italy, and if you’ve been following us, you know Oblivion guitarist Ted O’Neill has been telling us about how awesome Italy is right now in producing music that’s all things brutal.  It’s finally my turn to get on board with something of substantial value, and that is Tributo Di Sangue.

In my estimation, we’ve had few releases this year that comprise the sheer adrenaline rush this album delivers.  That isn’t to say that albums without the adrenaline rush haven’t been good, but it’s refreshing, always, to have something this straight-forward amidst what else is out there.  This is exactly just death-thrash.  If you like Hatesphere, Dew Scented, or Vader, then this is up your alley for sure.  It’s up mine.

The music of Subhuman is a torrent of double-bass-saturated, blast-beat-intense drumming, razor-sharp riffing with Exodus swagger, Decapitated ferocity, and Vader-esque war-making intensity, accompanied by vocals of in an old school Obituary/Death/Pestilence vein. END_OF_DOCUMENT_TOKEN_TO_BE_REPLACED