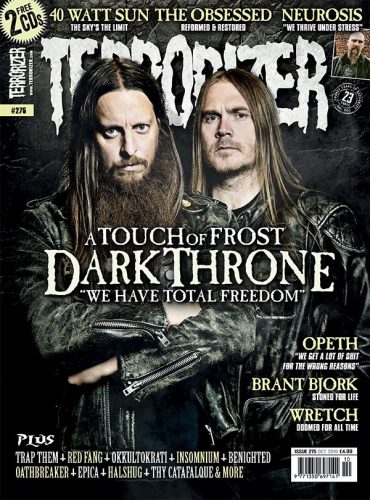 In past years I haven’t included Terrorizer’s annual lists of the year’s best albums in our LISTMANIA series, but I don’t know why. They’re a long-running metal print zine, and although their on-line site isn’t as large as the other cross-genre “big platform” web portals I typically include in this list, it’s a popular one, and of course far more metal-centric than most of the others. So this year, they’re in, especially since our own Andy Synn now writes more regularly for them (obviously an exercise in slumming).

Terrorizer began as a UK print zine in 1993 and now they’re up to Issue No. 275, which features a band on the cover that placed highly on the list you’re about to see. In in its own judgment Terrorizer “is considered the world’s most authoritative extreme metal magazine and when it comes to heavy metal and all forms of an ungodly racket”. They launched an online site in 2007, and now have hundreds of thousands of monthly visitors. END_OF_DOCUMENT_TOKEN_TO_BE_REPLACED