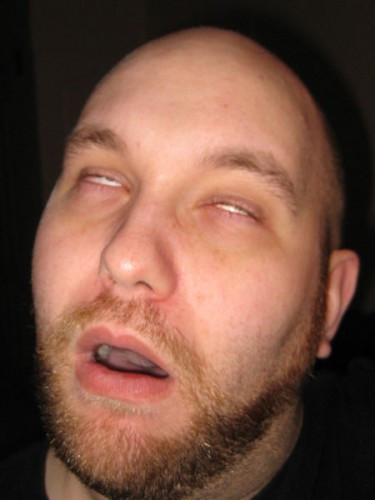 (Rev. Will continues on his mission of interviewing every metal blogger and journalist in creation with an actual personality, though this one runs the risk of making all the others seem dull by comparison. As one of Rev’s previous subjects, I just want to say, thanks a fucking lot, dude, what did I ever see in you?)

Perhaps the most greatly misunderstood metal e-zine out there on the Internet is Teufel’s Tomb. Style-wise, it is like the metal equivalent of Tucker Max (that Texan lawyer-by-profession and self-proclaimed asshole who shot to infamy in 2006 with his debut ‘fratire’, “I Hope They Serve Beer In Hell”); disgustingly hilarious and exuding a personality protected by such a thick layer of concrete-coated skin that the two words “shame” and “remorse” do not exist in the mastermind’s music reviewing dictionary (obscene words are a dime a dozen though!).

Many people got and still are getting offended by the mastermind’s highly satirical and offensive writing style, which probably explains its low number of ‘Like’s’ on Facebook even though Teufel’s Tomb has been in existence since 1996, but that is actually the whole point! And from an objective point of  view, the dude and his cronies actually consistently cover many of the latest album releases on time, so labels and bands especially should not be complaining. You know what they say about any publicity being good publicity.

The mastermind in question is, obviously, also a self-proclaimed asshole called “Teufel”. On top of being an experienced web developer and graphic designer, Teufel once worked in the adult entertainment industry (or “smut biz” as he calls it), and his recollections are as funny as Tucker Max’s own wild escapades.

Who knows? If his interest in something as underground as extreme metal music didn’t exist in the first place, he might have gone down a different career path entirely and penned a book called “I Hope They Don’t Buttfuck In Hell” and shot to promiscuous notoriety! END_OF_DOCUMENT_TOKEN_TO_BE_REPLACED