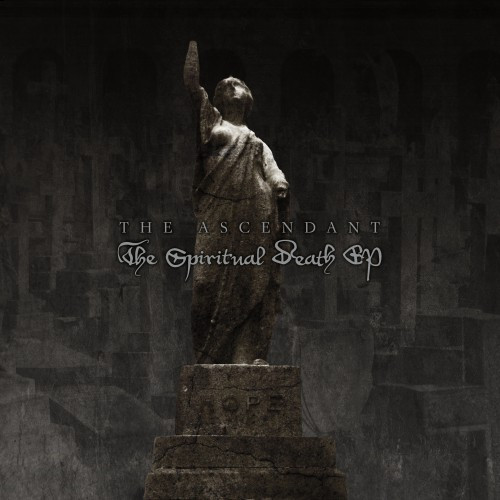 Five years ago, former Excessum bandmates Daniel “Contagion” Abrahamsson and Lars Broddesson (Marduk) joined forces with vocalist K.W. (Ad Hominem) to record a two-song EP, with Daniel on bass and Lars on drums and both of them laying down guitar tracks. They chose The Ascendant as the name of their band. The songs were never released.

Fast-forward to 2012, and Daemon Worship Productions reaches an agreement with The Ascendant to release the two songs as an EP on vinyl and CD under the name The Spiritual Death, with accompanying artwork by Grindwerkz. Why it took five years for the songs to emerge is a mystery, especially because they are so damned good.

On one level, the music simply rips hell. The guitars blaze with infernal fire, jabbing, tearing, and grinding in a whirr of tremolo fury. The jet-fueled drum performance hits like high-caliber weaponry on full auto. Big, booming bass chords surface and come down like anvil blows. And K.W.’s mid-range vocals howl like an ice storm.

On another level, the music reaches near-epic levels of grandeur, with memorable, dramatic guitar melodies rising on wings through the shrapnel clouds. END_OF_DOCUMENT_TOKEN_TO_BE_REPLACED