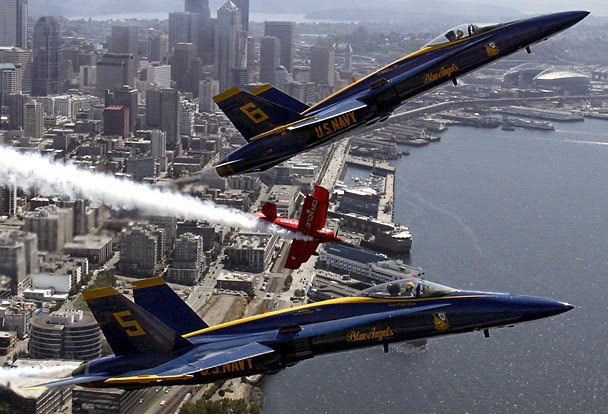 In Seattle, the city near the metallic island that NCS calls home, there is a summer tradition called Seafair, which is just about to begin. It’s been going on since the 1950s. It involves things like hydroplane racing on Lake Washington, a Boeing air show, music concerts (no metal, of course), both US and Canadian naval warships on parade, human parades, and copious drinking and eating. But my favorite part of the festival is the air show put on by The Blue Angels.

For those of you living outside the US, The Blue Angels are a squadron of Navy pilots who perform aerial acrobatics using F/A-18 Hornet aircraft flying at the speed of holyfuckwhatwasthat! They perform for 2 days in a row (this weekend), and they have practice runs for two days before the performance (the first of which happened to be today). They’re loud — louder than a drunken fuck in a thin-walled motel. In fact, they’re so distracting that a major interstate highway in their flight path is shut down when they’re practicing and performing. You can imagine how drivers feel about that.

Yes, The Blue Angels are metal, but that’s actually not what this post is about. What this post is about is an Onion-style piece of reporting about The Blue Angels in an internet mag called The Seattle Salmon. It so perfectly captures the tight-sphincter side of Seattle culture, and it’s so goddamned hilarious that I have to put it up, verbatim, right after the jump. It is definitely metal. The title of the piece? “Seattle’s Pussies Prepare To Bitch About The Blue Fucking Angels”. END_OF_DOCUMENT_TOKEN_TO_BE_REPLACED