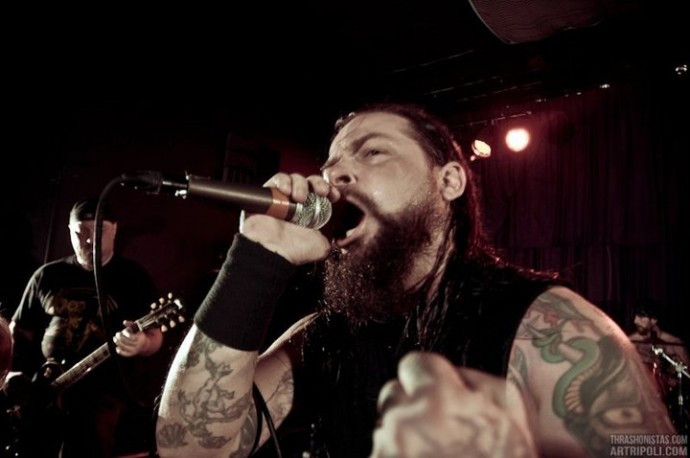 (Our man BadWolf did this interesting interview with Ringworm’s screamer and lyricist, Human Furnace. We’re also streaming some new Ringworm jams at the end.)

The Human Furnace has a lot going for him: the best stage name in heavy music, a voice to match, and a new album, Hammer of the Witch, coming out on Relapse. For those not in the know, HF fronts Ringworm, a seminal Cleveland band with formal ties to Hatebreed and Terror. For what it’s worth, I like Ringworm’s take on metallic hardcore better than those other bands—it’s more vicious, and less focused on sing-along breakdowns, even though Furnace and company bring the hooks on Hammer of the Witch with songs like “One of Us is Going to Have to Die.”

Furnace is the only consistent member of Ringworm—the band dropped a required listen with 1993’s The Promise, and then split for most of a decade when some of Furnace’s cohorts went on to join the mighty Integrity before the band re-united in the early aughts. Ringworm’s been going strong since, and a lot of that has to do with Furnace’s powerful pipes and tireless work ethic. We chatted about being a ‘head from the Midwest, the blurred lines between metal and hardcore, and how he keeps his voice in tip-top shape (hint: it’s nothing good).