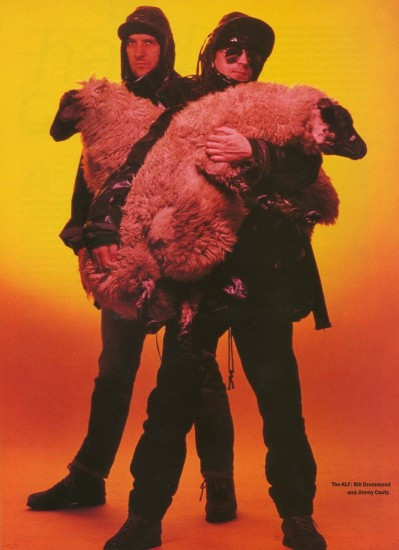 (This guest post was written by an Australian writer who calls himself Hoss.)

The other week, while researching for an article on John Peel and grindcore, I came across a nice little moment in metal history. When I first read about it, I thought it was just about one of the coolest things ever. I’m going to share it with you now.

In 1992 British art-electro-hip-hop-kinda-thing band The KLF were invited to perform their hit “3AM Eternal” live at the Brit Awards. The KLF are perhaps best known for being justified, ancient, driving an ice cream van, and, most importantly, being endorsed by Tammy Wynette. Ever the pranksters, they invited Ipswich grinders Extreme Noise Terror to perform in their stead.

Yes, I know what you’re thinking – ‘getting a metal band to perform a pop song!? THAT’S HIL-AR-IOUS!’. But you must remember that in 1992 this irony-laden chestnut was not yet old, and still might have caused at least a few bemused smirks. Part of the joke also included firing machine guns filled with blanks into the crowd (rad) and dumping a dead sheep at the afterparty.