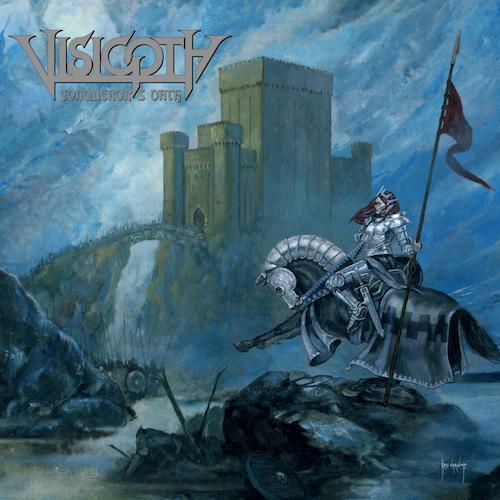 (This is a guest review by The Metal Elitist of the new album by the Utah band Visigoth, which was released by Metal Blade Records on February 9th.)

I consider myself a wary person. So, while I generally do agree that there exists a “golden era” of heavy metal long since passed, I tend to eye with suspicion many of the so-called NWOTHM bands which seem to coast their way to success on the waves of nostalgia. Though it is certainly true that we’ve been blessed with several excellent releases in this vein (think Sumerlands, Eternal Champion, or Night Demon), there are also countless me-too retro acts which have left me with a bitter taste in my mouth. Visigoth, however, is no such band. When I, like many others, first discovered them in 2015 after the release of their debut, The Revenant King, I knew that they had created something very special.

While The Revenant King certainly had its flaws, I sensed in it a maturity and passion that is missing from many of Visigoth’s leather-clad contemporaries, which is probably why the mournful wails of “Blood Sacrifice” and the thundering grooves of “Mammoth Rider” still manage to hold my attention almost three years later. Not content to simply rehash classic bands like Cirith Ungol, Heavy Load, and Grim Reaper, the Salt Lake City quintet had crafted a perfect chimera of both old and new.

Nevertheless, it was with caution that I patiently anticipated their follow-up. I knew the potential was there, but I felt the ol’ pessimism rising up within me, which couldn’t help but wonder, “Has the band already peaked? Will the successor be a disappointment?” END_OF_DOCUMENT_TOKEN_TO_BE_REPLACED