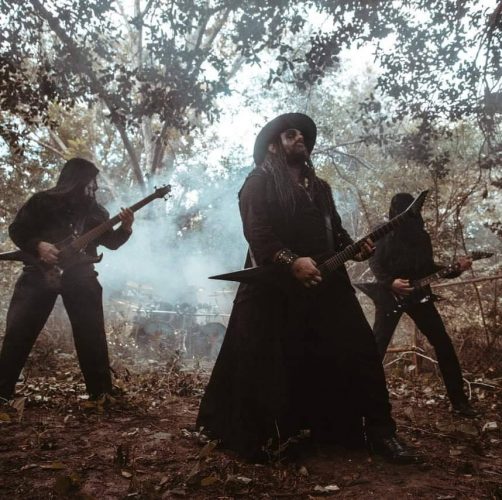 Black metal will probably always be principally associated with the cold climes of northern Europe. That is, after all, where the second wave originated and where it has achieved its greatest and most long-lasting popularity. Even as black metal has spread like another plague into almost every corner of the globe, much of the music still tends to gravitate toward the Scandinavian templates, even when bands come from places that couldn’t be more different.

One such place is southern Florida, where The Noctambulant make their home. With a trio of opening EPs under their belts and two albums, the last of which was 2019’s The Cold and Formless Deep, The Noctambulant had carved a black path that also drew upon Scandinavian traditions, albeit with an emphasis on hook-heavy melody as well as sinister, supernatural, and venomous atmosphere — and with a pronounced place for swaggering, hard-rocking heat.

Yet after five years of exploring the musical landscape of Black Metal, The Noctambulant have decided to adopt an aesthetic that they see as more authentic to their southern Floridian roots. “Being steeped in the traditions of Blues, Rockabilly, Goth rock and American Country”, they report that they have “found their niche in the Southern Gothic motif that they were raised around”. In a realm of pine forests and hot, oppressive swamps, they’ve changed course in a way that better reflects that environment.

As a sign of the band’s changed direction, we present a video for a new single being released today named “Hellrazor“, a video whose high production values contrast with the setting in which the band perform and a devilishly seductive figure cavorts. END_OF_DOCUMENT_TOKEN_TO_BE_REPLACED