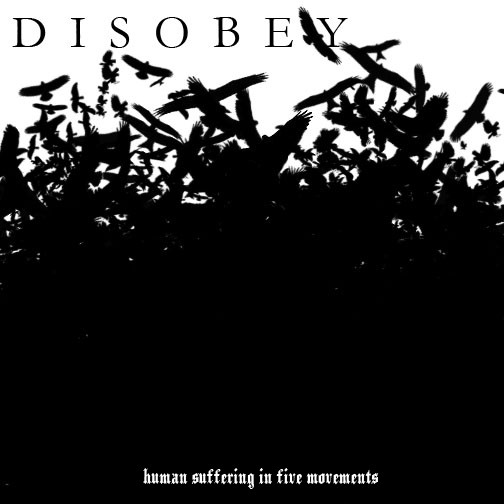 The unifying theme of this play is disobedience. That, and the fact that our friend Quigs is responsible for turning me onto both of the items herein. Act One is a band from New Jersey. Act Two is a candidate for my personal theme song.

Disobey is a band from Hillsborough, New Jersey. Not long ago they released their debut EP, Human Suffering In Five Movements. You might get a clue about the music from the band’s name, not only because it conjures up images of anarchic punks but also because of that “Dis-” prefix. It harkens back to that seminal hardcore crust/punk band Discharge, whose drum technique gave rise to the “D-beat” label and whose music inspired a horde of musical offspring, including Disfear, Disaccord, Disclose, and Discard.

Disobey sound like a pack of starving Dobermans unleashed with a mess of hamburger piled up about 20 yards in front of them. They get there in a hurry (all 6 tracks on the EP hit the finish line about 11 minutes after the start), and getting in their way is really not a good idea.

But don’t let my metaphor mislead you — the music itself is not balls-out racing. The instrumental intro track is a sludgy, heavy, black-as-night crawl, and the songs that follow are mainly mid-paced crushers. And I do mean crushers. END_OF_DOCUMENT_TOKEN_TO_BE_REPLACED