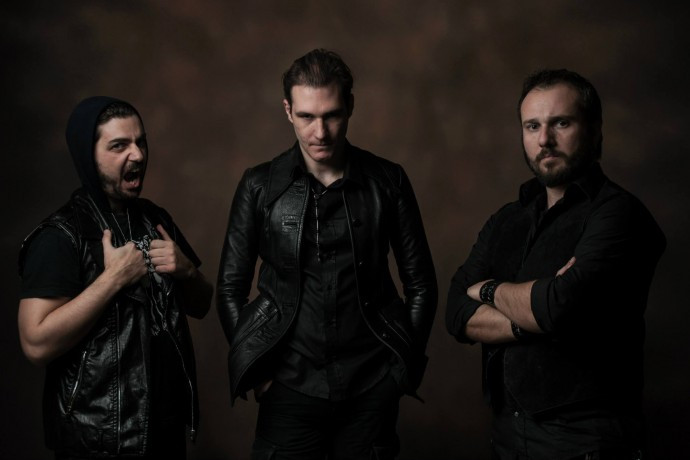 (NCS contributor KevinP somehow convinced Theoharis (above, middle), the guitarist and vocalist of one of my favorite bands, Hail Spirit Noir, to talk to him. Maybe all he had to do was ask? Having read the interview, I’d like to request a round of applause for both of them.)

K:  You, Dim, and Haris are all in Transcending Bizarre?, whose last album was in 2010.  You formed Hail Spirit Noir in 2010 as well.  Is the timing of this a coincidence?

T:  Haris actually had the idea for some time before 2010. What happened was that one of TB?’s members and a really good friend of ours, S.A Akis, died right in the middle of the recordings of the third record.  We completed the record but the whole thing just took a lot out of us. Once we were done with that, Haris presented to Dim and me demos for what would become Pneuma and the whole thing got started.  So, I don’t know if that counts as coincidence.

K:  Transcending Bizarre? is not standard black metal, but I wouldn’t call it “off the wall” by any means.  Hail Spirit Noir is a much further ‘left turn’ compared to what you were doing.  What made you come up with this unique hybrid sound?

T:  Haris wanted to pay tribute to all the prog rock he was listening to and the atmosphere of the 70s horror movies.   But with a more sinister twist and a sound, that despite its roots, being in that era would sound up to date.  In simple terms the original combination was late 60s/70s prog rock+ black metal+ horror movies.  But it all ended up with our combined influences a lot weirder. END_OF_DOCUMENT_TOKEN_TO_BE_REPLACED