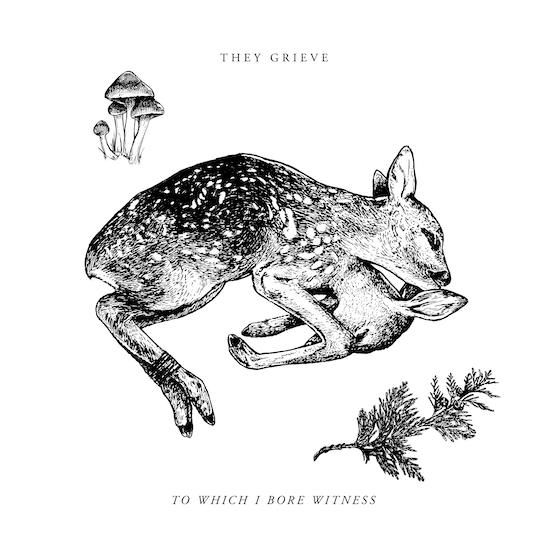 The Ottawa-based duo They Grieve (Gary Thibert and Deniz Güvenç) made their advent with the EP I Made My Sacrifice Accordingly in late 2016, and now, a substantial number of years later, they’re moving toward the release of their first full-length, To Which I Bore Witness, which they recorded at Apartment 2 with Topon Das of Fuck the Facts. The band readily acknowledge that this new music is a departure from what you might have heard on the EP, and thus should be considered in its own right, standing alone. As Deniz explains:

“This album, both lyrically and musically, tries to capture the uncomfortable juxtaposition between weakness and weight. We are constantly trying to express the ways in which the ugliness and decay we see in the world sets itself down and plants its roots inside of us—how the weight of the world transforms into our own weakness once it has done so. We try to capture this feeling of juxtaposition and tension within the music itself by oscillating between ambient, textural drones and heavy, doom-laden riffs.”

As a sign of the changes, what we have for you today is the new album’s title track, which is paired with a video that’s as mysterious and as interesting to watch as the song is to hear. END_OF_DOCUMENT_TOKEN_TO_BE_REPLACED