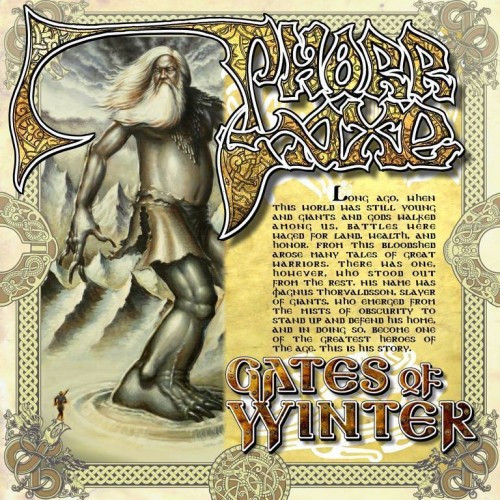 MetalSucks and American Aftermath have premiered individual tracks from Gates of Winter — the second album by Indiana’s Thorr-Axe — and those were tasty appetizers, but now we serve you the main course: a full-album stream.

When I first saw the cover of Gates of Winter, and coupled that with the band’s name, I’m afraid I got the wrong impression. I was expecting tongue-in-cheek, Viking-themed folk metal, with extra cheese. Wrong, wrong, wrong.

There is indeed a narrative concept that gives the album its structure — a tale loosely based on Norse mythology, with some high fantasy thrown in. As the band’s vocalist/guitarist Tucker Thomasson has said (here), “It’s full of frost giants, shit talking, a magic sword forged by a smith producing an incessant stream of f-bombs, and a metric fuckload of ice and snow.”

But the music, the music is something else again. It is no joke. END_OF_DOCUMENT_TOKEN_TO_BE_REPLACED