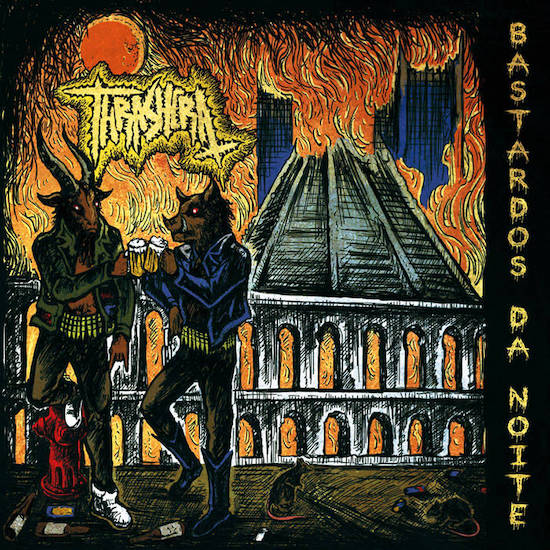 Much has been written about the history of thrash metal, and in those annals you’ll discover how it evolved from both the stripped-down rebelliousness of punk and the influences of earlier “classic” heavy metal, adding more speed, more aggression, and an even more defiantly confrontational attitude to the music. One thing that sometimes gets lost, especially in how the genre has evolved, is that some of the earlier practitioners made the music also sound downright evil.

The Brazilian band Thrashera haven’t forgotten that. It may have something to do with the fact that their own homeland spawned such bands as Sepultura, Dorsal, Atlântica, Chakal, and Vulcano, not to mention Sarcófago. But whatever the reason, these dudes revel in the “golden age” of thrash, when it was taking shape as a world-eating but still deeply underground and confrontational force.

Their roots are plain for all to hear, but they’re so damned good at what they do that the music sounds explosively alive — and yes indeed, downright evil — rather than generic and worn out. You’ll believe this for yourselves when you hear their new album Bastardos da Noite, which we’re streaming in full today in advance of the record’s imminent July 20 release by Helldprod Records. END_OF_DOCUMENT_TOKEN_TO_BE_REPLACED