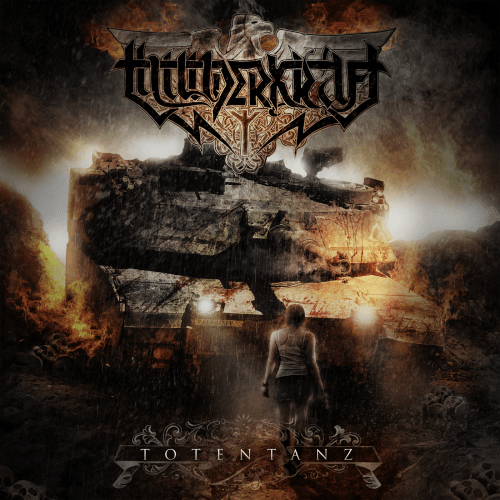 I can’t stand it any more. I tried to hold off writing anything about this song or this band until I could finish a review of their forthcoming album, but that lasted less than 24 hours. It’s almost like if I don’t share the experience, then it didn’t happen. There’s bound to be some kind of clinical term for this type of blogging sickness.

Anyway, the band is Thunderkraft, and they’re from the Ukraine. The album is called Totentanz. It will be released on April 2 in Western Europe, but on March 12 in the rest of the world, by a label called Svarga Music. It’s the band’s second album, but the first one dates all the way back to 2005 (The Banner of Victory). Yesterday, Blistering.com premiered the first song from the new album: “The Creator of Life”. I checked it out, and it transfixed me like a deer in the headlights.

The band’s name rang a faint bell, and so I searched my e-mail messages — and lo and behold discovered that a PR shop had sent me a download link for the whole album. I know that makes me sound stupid, but we now get so many promos every day from PR outfits, labels, and bands that I’m unable to explore all of them. Plus, I’m stupid.

Here’s a description of the Thunderkraft musical style based on “The Creator of Life”; it will probably make you wonder, “how dis work?”: Ukrainian industrial folk death black metal with bagpipes, pulverizing riffs, compulsive rhythms, orchestral synths, yelled/cracked/growled vocals, squealing guitar leads, and a memorable folkish melody. It’s like The Monolith Deathcult made babies with Arkona, and Dimmu Borgir delivered the mutated offspring. By the way, I think there’s some Tuvan-style throat-singing in the mix, too. END_OF_DOCUMENT_TOKEN_TO_BE_REPLACED