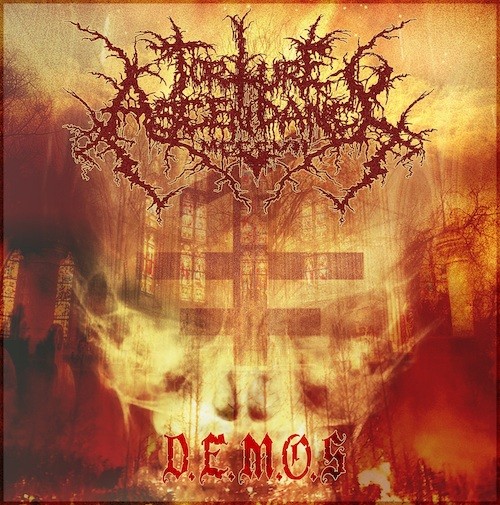 Located in Lancaster, Pennsylvania, the black/death metal extremists Torture Ascendancy 1307 first came together in 2011, formed by vocalist Chrisom Infernium (also a member of Veilburner and Pyrrhic Salvation), drummer Isaiah (ex-Human Repugnance), bassist Jasin (ex-Tenth Circle), and guitarists Don and Tj. Although the quintet have made their mark in many live performances, sharing stages with such groups as Soulfly, Immortal Bird, Mortician, Vital Remains, and Krieg, they have only now reached the point of releasing their first recording. Entitled D.E.M.O.S., it’s a seven-track debut that will be released on July 17th. From this first demo, today we’re premiering the opening track, “Amon Morgue Matrix“.

As the title of the song may suggest, Chrisom Infernium has crafted lyrical themes for D.E.M.O.S. that derive from occult subjects such as Gnosticism and Jewish Kabbalah, and other topics relating to theosophy and philosophy, as well as tie-ins to the Veilburner universe. With respect to the song we’re presenting  today, both the lyrics and the music (the band tell us) are intended to “work on many levels and interpretations of mysticism, specifically ‘the four worlds’ to allow the listener to perceive the lyrics in a way that resonates to them”. END_OF_DOCUMENT_TOKEN_TO_BE_REPLACED