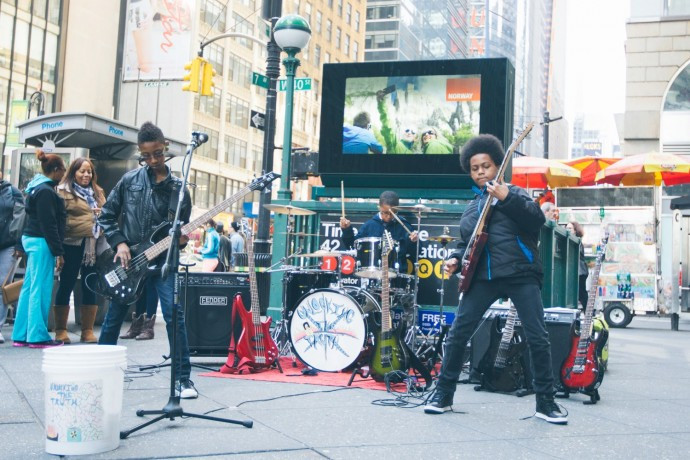 Back in April, a video of three 12-year-olds playing music on a Times Square street corner made the rounds on the interwebs. A combination of three things made a lot of people sit up and take notice: the kids were black, they were playing metal, and they were pretty damned good — especially for 12-year-olds. The name of their band: Unlocking the Truth.

I’d like to think that the video would have drawn attention even if these were white kids, but let’s face it, at least in the US you don’t see many black kids of any age playing underground metal. But as I said, that’s really only part of the reason why the video grabbed some attention. It happens that these dudes have got some really good chops for their age, especially the guitarist.

Many other videos of Unlocking the Truth playing in public have surfaced over the ensuing weeks, and this weekend several friends sent me a link to a short documentary about two of the band’s members — Malcolm Brickhouse and Jarad Dawkins — that went up last week, and it’s an awesome (and endearing) thing to watch. Yeah, these are young kids, but both of them seem really committed to what they’re doing, and they’ve got big ambitions. More power to them. END_OF_DOCUMENT_TOKEN_TO_BE_REPLACED