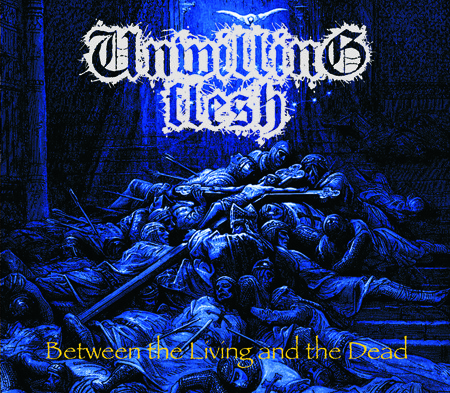 Death metal of the old Swedish school, especially in its more melodic forms, is my metal comfort food. It proved to be my own gateway into ever-expanding realms of extreme music, and it still puts a smile on my face no matter how many times I revisit the classics. There’s something genuinely timeless about the style.

Of course, as every student of metal history is well aware, the decades that have passed since the early 90s have spawned increasingly diverse variations on the original template, with a steadily increasing tendency of many bands to pack their music with technical acrobatics or drown it in a murky, polluted, soul-sucking atmosphere of pure evil.  To find a new band who have directed their creative impulses back to the well spring is thus ironically refreshing, especially because what they’ve created is so tremendously good.

The band’s name is Unwilling Flesh, and its membership will come as a big surprise to most: It’s the brainchild and alter ego of multi-instrumentalist Andrew D’Cagna, who is better known for his work in such groups as Brimstone Coven, Obsequiae, Nechochwen, and Infirmary. It turns out that he, too, harbors a love for Swedish death metal. Fueled by inspiration from such old-school progenitors as Carnage, Eucharist, and Excretion, he has created an album under the Unwilling Flesh moniker entitled Between the Living and the Dead that’s due for release by Eihwaz Recordings (the sister label of Bindrune Recordings). END_OF_DOCUMENT_TOKEN_TO_BE_REPLACED