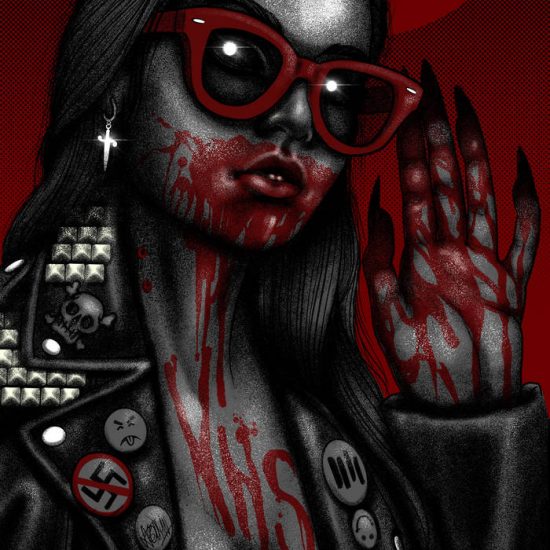 (Here’s Todd Manning‘s review of the new album by Ontario-based VHS, which is set for a December 3rd release by Wise Blood Records.)

Halloween lasts all year long unless you’re a poser. So it doesn’t really matter that Canada’s death fiends VHS aren’t dropping their album I Heard They Suck…Blood until December 3rd, the shit is going to hit you the same regardless. Like Halloween, the influences VHS lean on feel eternal in Metal’s history. Take one part Scream Bloody Gore, mix in some early Autopsy, Repulsion, and more recently Exhumed, and you have a fist-pumping, gore-spewing recipe for old school death metal.

While not exactly breaking the mold, VHS take the sound of their predecessors and make it their own. They look to a time when death metal’s DNA still had a lot of thrash mixed up in it. Not the polished excellence of the Bay Area bands, but that nasty sound pioneered by Kreator and early Slayer. Oftentimes, such as on “Fake Blood and Push-Up Bras”, a track that features Black Dahlia Murder’s Trevor Strnad, things take on an almost punk feel. For those sections, the Autopsy influence gives way to Abcess, yet when they do slow down, the evil melodies of Chris Reifert’s home base return. END_OF_DOCUMENT_TOKEN_TO_BE_REPLACED 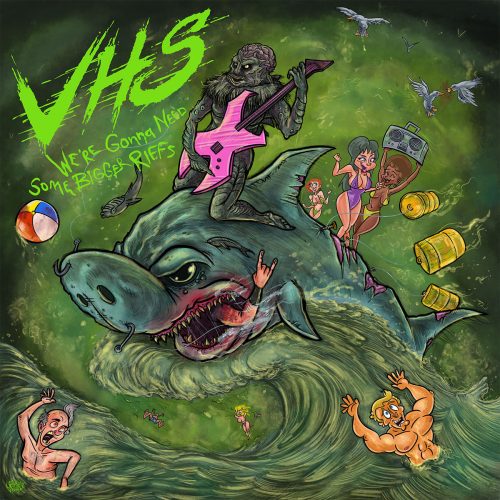 Thunder Bay, in the northwest of Ontario and across Lake Superior from the northern coast of Wisconsin, is home to the metal band VHS. So far as we know, Lake Superior is devoid of deviant sea monsters, killer whales, and ravenous giant sharks, but perhaps the band’s proximity to vast waters had something to do with their attraction to such submarine killers. Whatever the cause, VHS have fully embraced their attraction to ’80s films devoted to seaborne horror and their love of punk and death metal (among other musical interests, as you will soon discover) on their new album, We’re Gonna Need Some Bigger Riffs (get it?).

The new album is set for release on July 26th by Horror Pain Gore Death Productions (U.S.) and Rotten Roll Rex (Europe). The album features guest appearances on two of the songs. Trevor Strnad of The Black Dahlia Murder lends his snarl to the previously premiered “Rooting For the Villain“, and the song we’re presenting today through a lyric video — “Death and Carnage Coming in Waves” — includes guest vocals by none other than Exhumed’s Matt Harvey. END_OF_DOCUMENT_TOKEN_TO_BE_REPLACED