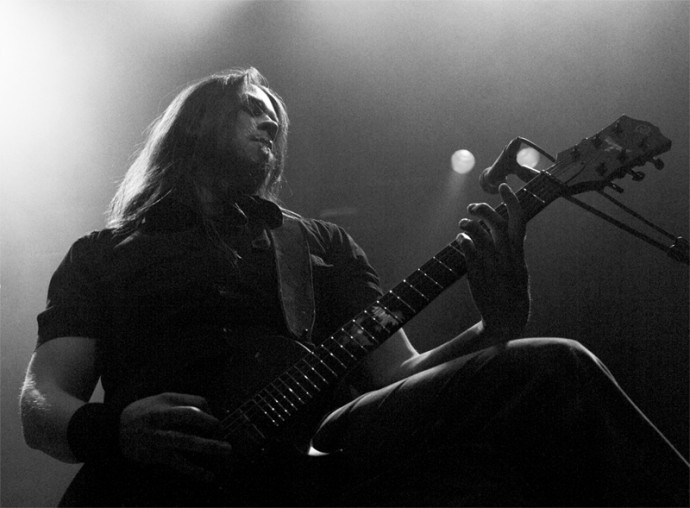 (NCS writer DGR recently had the chance to pose some questions by e-mail to Ville Friman, guitarist, song-writer, and co-vocalist for Finland’s Insomnium, whose new album Shadows of the Dying Sun was reviewed by the same DGR here.)

Thank you so much for sitting down for this interview. How are you feeling as the official release dates of Shadows Of The Dying Sun move closer?

Ville Friman: No worries Dave, our pleasure really. It’s exciting times. Album seems to be doing well in the press, and we just found out that it made album of the month in German Metal Hammer, which is pretty big. Just hoping that people will like it and enjoy it as much as we do.

Shadows Of The Dying Sun is still recognizably Insomnium but there are a couple of shifts in sound. For example, I noticed a pretty big increase in tempo on a lot of the songs and the inclusion of some serious blastbeat work on the part of Markus. Insomnium have done fast tunes and more “traditionally” (if you could forgive a reductive phrase) melo-death songs before, but this album really sees the speed increase on multiple songs. Were you guys feeling in a faster mood than usual?

Ville Friman: Yes, I guess the blastbeats are bit of a new thing with us. We have fast songs on the album, but also a couple of slower pieces. So it’s a mix of things. We weren’t trying to be fast intentionally. I guess we just brought the tempo up a notch in general. And we were thinking about finding the best tempo for each song, and when we wanted to sound fast, we went pretty much as fast as we could. END_OF_DOCUMENT_TOKEN_TO_BE_REPLACED