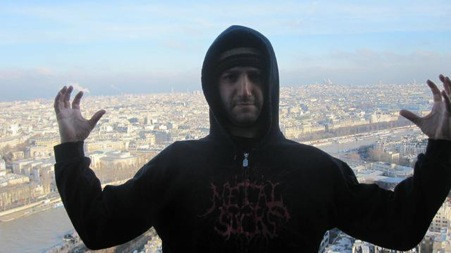 (Shortly before The Number of the Blog met its sad demise, TNOTB began publishing an interview series called “Keyboard Warriors” written by a relatively new TNOTB staffer who called himself Rev. Will. Because the archive of TNOTB posts seems to have exploded in a spatter of bits, never to be seen again, we agreed to give these interviews a home here at NCS. We started on Sunday and will be posting one per day this week. Today’s interview was originally published on Nov. 22, 2011.)

In 2006, a music blog burst onto the then-humorless and lightly-populated extreme metal blogosphere, boldly calling itself: MetalSucks. Two to three years after that, its popularity and authority on all things metal and troll-worthy soared exponentially. Before we know it, MetalSucks have even inspired their first batch of younger peers: The Number Of The Blog (R.I.F.P.), No Clean Singing, and Heavy Blog Is Heavy.

Honestly, when I first came across MetalSucks, I was trolled. My first impression was seriously that of a blog that was dedicated to bashing metal music in general… until I noticed how their blog logo copied the font for Pantera’s logo. Yes, laugh at me all you want, but I bet many of you out there probably went through the same trollololol-zy episode too before y’all realized that MetalSucks is really a metal blog by metal-lovin’ people for metal-lovin’ people.

Well, enough prattle already. Time to start feasting your undeserving eyes on what ½ of MetalSucks’ founding duo has to say to my siege of questions. From the elusive MetalSucks headquarters in NYC, the alter-ego of Mötley Crüe’s frontman talks about the two albums released by the blog so far, the inaugural Metal Suckfest from 2011, and other industry-related topics (VN – “Christ, this was a marathon.”). END_OF_DOCUMENT_TOKEN_TO_BE_REPLACED