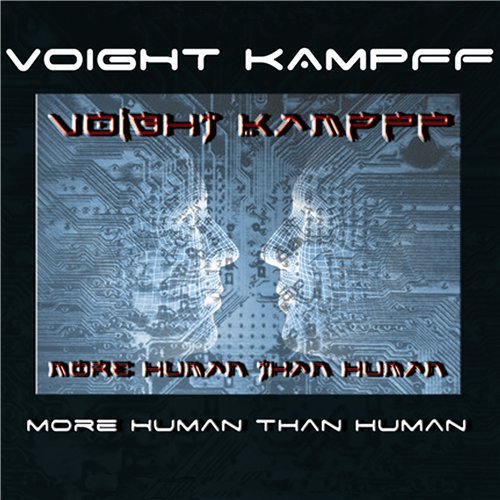 (Named for the polygraph-like test that Blade Runners use to determine whether a subject is a replicant, Voight Kampff are a French metal band who released their debut album late last year. In this post TheMadIsraeli gives it a brief review.)

I figured it was time to start digging into the depths of the internet and find really obscure shit.  Voight Kampff certainly caught me with the stupid, almost borderline shitty cover art you see above, labeling their music as “Progressive death/thrash metal” and boasting Blade Runner references out the ass.  To say the least, I was intrigued.

Contrary to the feeble but futuristic cover art, this album is a surprising old school kick in the teeth.  Voight Kampff are an odd band, playing a style that never hit it off with many people at its time, with a production that sounds straight out of the early 90’s or late 80’s.

You see, Voight Kampff appear to be huge fans of that really awkward phase around the 80’s going into the 90’s when thrash metal and death metal were coming to be almost the same thing.  You had the technicality of death metal, and that genre’s vocal stylings as well, but the speed and composition sense of thrash metal.  We saw this with bands like Pestilence on Testimony of the Ancients, Coroner on Mind Vortex, or Death on Human. END_OF_DOCUMENT_TOKEN_TO_BE_REPLACED