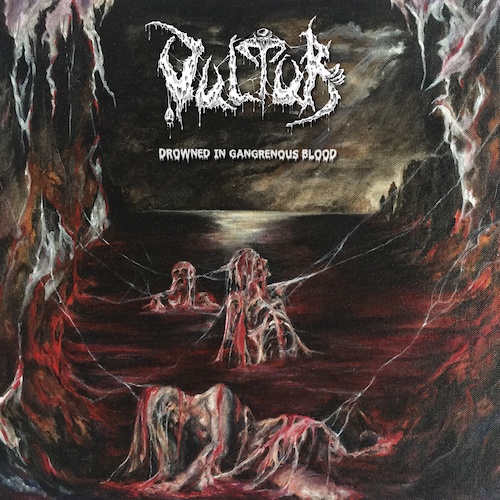 I feel like there ought to be a death metal air raid siren that could be turned on when albums like Vultur’s Drowned in Gangrenous Blood are on the way, not so much as a warning (though some people probably should be warned so they can run for the hills) as it would be a rallying cry for addicts of thoroughly gruesome and brutally bludgeoning old school monstrosity. I can imagine the throngs coming on like the zombie hordes in World War Z.

This new album, which follows Vultur’s 2016 demo (Beak) and their 2018 debut album (Entangled in the Webs of Fear) really does display the kind of spirit and craftsmanship that is likely to cause slobbering hunger among fans of evil, diseased, and neck-wrecking death metal. These Hellenic hellraisers have learned their black art very well, as you’ll discover when you hear the track we’re premiering today in the run-up to the album’s October 31st release by Memento Mori. END_OF_DOCUMENT_TOKEN_TO_BE_REPLACED