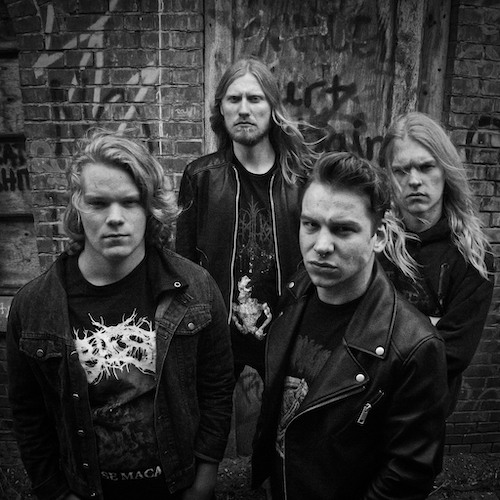 The four marauders in Wayward Dawn from Skanderborg, Denmark, may not be grizzled veterans (in fact, their ages range from 19 to 21), but you’d never guess that from listening to their music. The brand of death metal they’ve embraced is ferociously powerful, demonically sinister, furiously enraged, and delivered with explosive energy. And they’ve already demonstrated precocious song-writing talent, injecting their slaughtering assaults with booming grooves and the kind of riffs that get stuck in a listener’s head.

Wayward Dawn made their mark last year with their debut album, Soil Organic Matter, and participated in a four-way split this past spring (Carriers of the Disease), and now on this lucky Friday the 13th, they’re releasing a new single through Mighty Music named “Prophet“. To commemorate the occasion we’re cooperating with a few other sites to present the debut of the song through a video that captures the band’s live energy. END_OF_DOCUMENT_TOKEN_TO_BE_REPLACED