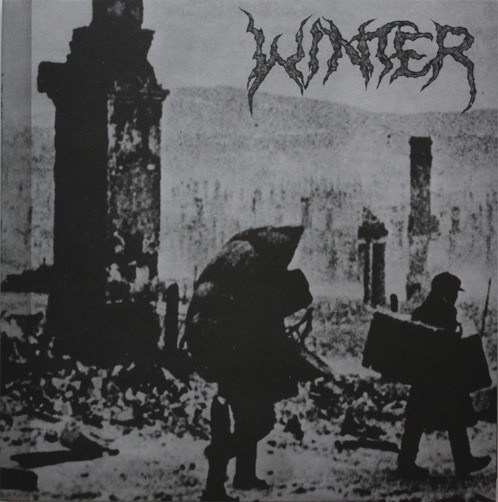 (TheMadIsraeli contributes another look-back at a classic album of metal.)

Winter are a band who have remained unfairly underrated and unrecognized in the metal landscape.  These guys virtually created the deathdoom style, and on the basis of their only full-length album, they still qualify as the heaviest, most morbid, and most brutal band in the entire sub-genre; AND THIS ALBUM IS 21 YEARS OLD NOW!

What I am revisiting today is the original version of the album.  Winter’s Into Darkness can be purchased on disk along with an EP called Eternal Frost that was released in 1994. Despite being a whole new batch of material, the EP feels perfectly at home on the same disc with Into Darkness.  But for those who are interested, you can get Into Darkness from Southern Lord Records on its own without the EP.

Into Darkness is so dank, so dark, so putrid and vile you can literally feel and imagine yourself walking through sewage and corpses as you listen to it.  Winter were only a three piece, a small band for the time and still small by modern convention, but the three of them produced such unheard of sounds that the music must have come as a shock in contrast to the rest of what was going on in 1990.  Tuning their instruments down to A for fucking abysmal was something that had to have sounded nuts back then, at least in the States, though we know that even by this time, Swedish bands were tuning their instruments down to the same or similar keys. END_OF_DOCUMENT_TOKEN_TO_BE_REPLACED