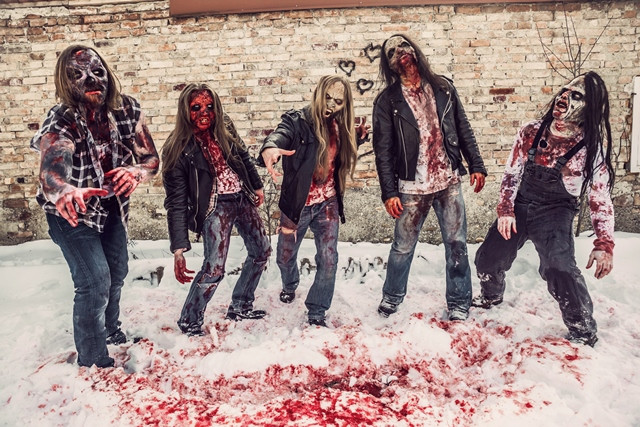 (Occasional NCS contributor and a tough man to please, KevinP, recently had a talk with Wolfgang Rothbauer, guitarist for Austria’s Zombie Inc., whose new album Homo Gusticus was recently released by Massacre Records. We’re pretty sure Wolfgang is in the middle of the photo above. At the end of the interview we’ll have some music from the new album plus two videos.)

W:  I am ready! but be aware…I am the murderer of 6 beers already!!

K:  Oh boy, hahaha.  I know this is one of those annoying interview questions, but give us a little backstory on how the band formed (this will help out all the newbies who are just discovering Zombie Inc).

W:  Well, it was just Gerald Huber (Collapse 7) and me, who met in 2009 for some beers…I had to record some vocals for his project…after this we had more beers and talked about the good old 90`s death metal…after this we decided to form an old school death metal band… we knew that this would not be perfect and “real” if Martin Schirenc wasn’t on vocals …so we asked our long-time friend to follow us…he was surprised but followed…the other guys too, but they were later replaced by Martin Arzberger on bass (Molokh, Hollenthon) and Florian Musil on drums (Raising the Veil, Molokh). After our infection caused by the zombie babypiss, we deformed to zombies…so here we are! END_OF_DOCUMENT_TOKEN_TO_BE_REPLACED