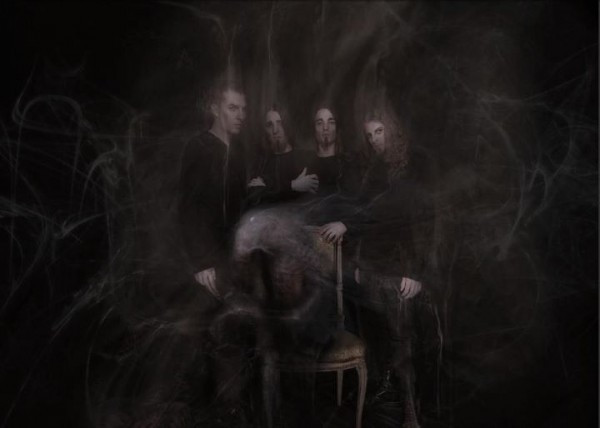 Thulcandra is a German band whose 2010 album Fallen Angels Dominion (reviewed here) was an utterly faithful and beautifully rendered homage to Dissection. The band’s 2011 follow-up, Under A Frozen Sun, was also very good and proved that Thulcandra’s talents exceed even what was achieved on the debut, though it was one of many deserving releases I didn’t find time to write about last year.

Thanks to Thulcandra, I recently discovered a new band called Wraithcult. Its members include two Thulcandra participants, the “evil twins”, Sebastian and Tobias Ludwig (guitarist/vocalist and bassist, respectively). Both Sebastian and Tobias were also active for five years in yet a third band, the now-defunct Helfahrt, and two other former Helfahrt members have joined them to complete the line-up in Wraithcult: guitarist Markus Klüpfel and drummer Andreas Mecker.

Wraithcult have recorded a debut album called Gestalt (with Dark Fortress guitarist V. Santura at the helm). When I wrote the original version of this post, two of the album’s songs were available for streaming, and those were the two that convinced me this band is worth following. In doing a quick check for possible updates to this post, I discovered that the entire album is now available for streaming.

I tried listening to the album stream while working my fucking day job (which has become a fucking day-and-night job), because at the moment that’s the only way I have any chance of listening to music, but it didn’t work out very well. END_OF_DOCUMENT_TOKEN_TO_BE_REPLACED