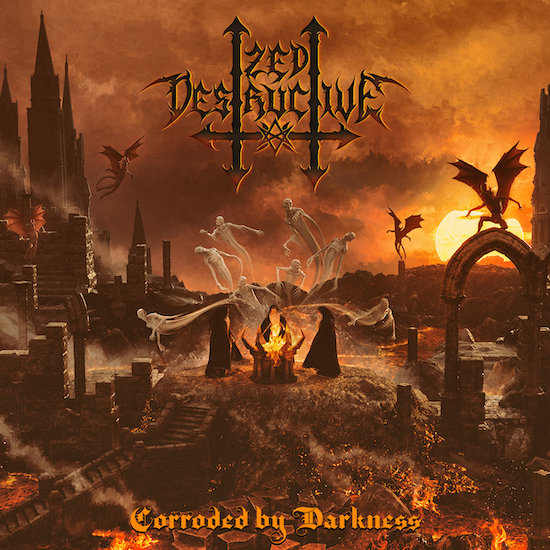 The Israeli band Zed Destructive shares the name of its founder, who is the vocalist of Winterhorde and the former lead guitarist of Thokkian Vortex. He started the band in 2017 after leaving Thokkian Vortex and began working on music with former Thokkian Vortex drummer Ariel Lior. In time Dani White joined the band as second guitarist, and Daniel Kitchka rounded out the group as its bassist.

Their first record is an album named Corroded By Darkness, which will be jointly released on August 31st by Satanath Records‘ label-partner GrimmDistribution (Ukraine) and Wings Of Destruction (Russia). In the music there are occasional hints of Winterhorde’s air of theatrical drama, but don’t go thinking that Zed Destructive is Winterhorde by a different name, because the music here is a distinctive experience that stands apart, a hybrid of death and black metal that rightly led the releasing labels to recommend it for fans of Deicide, Death, Behemoth, Dissection, Gorgoroth, Marduk, and Dark Funeral. END_OF_DOCUMENT_TOKEN_TO_BE_REPLACED