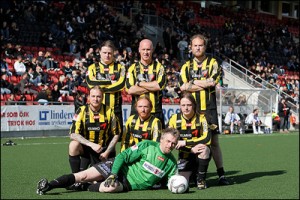 Blabbermouth reports today that Dark Tranquillity have chosen “We Are the Void” as the title of their ninth album, due for release in Europe on March 10, 2010 on Century Media Records.  The album is being mixed by Tue Madsen, who has handled similar duties for Behemoth, Kataklysm, and The Haunted, among others.

Honestly, your Authors don’t really think announcement of an album title qualifies as news.  But we’re all Dark Tranquillity fiends, we had the pleasure of seeing them play a riveting set when they passed through Seattle last year, and frankly, anything related to a new CD from one of the architects of Swedish melodic death metal is going to draw attention on this site.  Until that release, we’ll have to content ourselves with the performance DVD they released in the U.S. about 10 days ago (“Where Death Is Most Alive”).

For a recent interview with vocalist Mikael Stanne, who talks about the DVD, the forthcoming CD, and other DT topics, go here.  In that interview, Stanne says they’re working on a headline tour of the U.S. to begin after the new album drops.  Here’s hoping it includes a stop in the Emerald City . . . .

And yeah, that’s them in the photo along with a couple guys from The Haunted about to play in a soccer tournament last spring.