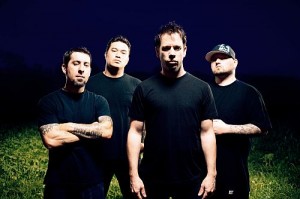 This Arkansas band originally formed in 1988, broke up in 2002, and reunited in 2008 with a six-week US tour (“Stronger Than Hell”) headlined by Seattle metalcore band Demon Hunter. I had lost sight of the band during their hiatus and had not paid any serious attention to them even before the break-up — frankly, because of preconceptions based on their categorization as Christian metal. But I caught the “Stronger Than Hell” tour when it passed through Seattle, and their performance that night was one of the best I saw that year.  Hell, one of the best in many years. They totally tore up the place, and a worshipful packed crowd at El Corazon went crazy over them. So did I.

When Demon Hunter’s set began, frontman Ryan Clark paused to explain how influential Living Sacrifice had been, not only to Demon Hunter but to a whole generation of Christian-focused extreme metal bands, and it became clear that Demon Hunter had organized the tour in part as a coming out party for the reunited Living Sacrifice.

As I later learned, the band’s influence extended beyond the Christian metal sub-genre. Just a little web-surfing turned up lots of praise from a wide range of metal bands who identify Living Sacrifice as a powerful, groundbreaking influence — a band that early on combined thrash, death, and groove metal into a potent attack.  To pick one example from Throwdown frontman Dave Peters:

“You would be hard pressed to find bands who started during the time Living Sacrifice did that are still around making albums at all, let alone timeless and relevant metal. Their musicianship is unreal, but I’ve always been blown away by the band’s songwriting ability. They never fail to make their songs tell a story but without following any kind of predictable formula or spinning off into tangents. And they are a riff factory!” 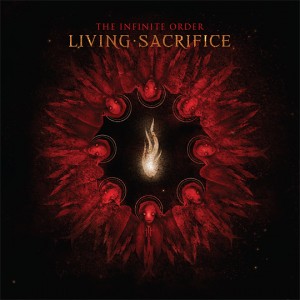 The new song is a worthy addition to the band’s catalogue. It’s an in-your-face, riff-laden assault with a compulsive groove. Bruce Fitzhugh has got one of the most distinctive and powerful voices in death metal and it shows to good effect on “Rules of Engagement.” Definitely makes me even hungrier for the new release.

Living Sacrifice released their first CD in 1991 and went on to release 5 more, plus a 2005 “best of” CD, In Memoriam (that also included 3 new songs). After the reuniting in 2008, the band self-released a digital-only CD Death Machine. The forthcoming CD has been mixed by Andy Sneap, who has done the same for the likes of Megadeth, Machine Head, and As I Lay Dying.