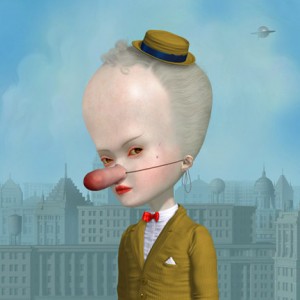 It’s more than low self-esteem.  People with low self-esteem might actually be unsuccessful people.  People with imposter feelings actually have achieved some success, but aren’t able to recognize and value their own achievement.  And perversely, with each new success, the fear of being “found out” increases.   I’m guessing there are people in some successful metal bands out there that suffer from those fears and who can’t enjoy their deserved success as a result.  Poor bastards.

Apparently, imposter feelings drive some people to work harder to postpone the day when they fear other people will realize they’re really not that good.  Some people are openly self-deprecating – though that may be more of a social strategy (getting points from appearing humble) than true imposter syndrome.

And then of course, some people who are convinced they don’t really deserve their successes are absolutely right.  They really aren’t as good as most people seem to think they are, and they really do have reason to fear (even if they don’t) that someday everyone will wake up and see them for the frauds they are.

I don’t know if this last class of people are really suffering from imposter syndrome.  It’s more like they should be suffering from imposter syndrome.  They’ve achieved some success, but whether they realize it or not, they really are imposters and the time really will come when the public realizes their success was due to luck or good timing or some other bullshit instead of true talent.  In the world of metal, I’m thinking of bands like Attack! Attack! and Brokencyde and Atreyu and others (too numerous to name).

In case you were wondering, there’s already a band called Imposter Syndrome.  They’re based in New York City.  On their MySpace page, the band describes its music as “turbulent yet melodic rock.”  The words “edgy,” “soaring,” and “aggressive” also appear.  I’m gonna take a wild guess and say this isn’t metal.  I guess I could listen to a song or two to find out.  On second thought, no.