Following a brief musical interlude, the band then launches into “The Story,” another genre-bending, technically complex piece with multiple tempo changes, jazzy interludes, and even more vocal variation (including flashes of clean singing). Following another brief instrumental interlude, the band explores the “Human Condition” — more unexpected tempo changes, brutal vocals, crashing riffs and machine-gun bass-and-drum work alternating with more episodes of progressive jazz. “Awaiting Necropolis” is another foray into tech-death territory with probably the most head-bangable rhythms on the album. And then, to finish off this mind-blowing collection we come to “Void II,” another melodic, jazz-influenced number. 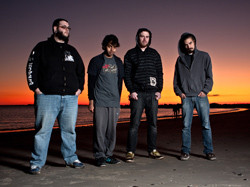 There are other bands on the scene that self-consciously force together an eclectic blend of technical styles in what can only be described as pretentious showing off. What saves The Binary Code from that abyss is a truly remarkable level of technical skill coupled with a superior approach to song-writing that somehow makes all this craziness fit together in a satisfying whole.

Guitarist and principal song-writer Jesse “Jesper” Zuretti was once asked which bands he would like to tour with, and he named Sikth, Textures, Scarve, A Life Once Lost, Meshuggah, Extol, Cult of Luna, Cave In, He is Legend, Porcupine Tree, Portal, Soreption, Katatonia, Converge, Lewd Acts, the End, the Ocean, Decapitated. Pretty cool list, huh? I’m pretty sure I couldn’t have picked out those particular bands as influences on Suspension just from listening to the album, but having read the list, I can hear something of almost all those bands in the mix — hard to imagine, but check it out for yourself. (MetalSucks has ended the free streaming of the entire CD, but the album is available for download at the bargain price of $5 at this location.)

What’s even more wild is that Suspension of Disbelief was recorded more than a year ago, in November 2008, and Jesper tells NCS that the band’s sound has continued to evolve since then (some details about that tomorrow).

Amazingly, The Binary Code is still unsigned, but I have a feeling that state of affairs won’t last much longer.

The Binary Code will be touring with French metallers Hypno5e and the awesome Revocation on the MetalSucks-sponsored “Metal As Art” tour, which kicks off in NYC on January 6.  This is going to be a kick-ass show.  I haven’t yet checked out Hypno5e, but Revocation’s 2009 release is just amazing, and the chance to see them and The Binary Code on the same bill isn’t an opportunity to be lost. Jesper also tells us that the band will feature a second guitarist on the tour, Todd Stern from the band Abacinate. Can’t imagine what this band will sound like with a two-guitar attack, but we’re damned sure looking forward to finding out.

We’ll be there in force with this tour hits Seattle in January, and we’ve got the full list of dates and places below. But first, check out the band performing two songs live in NYC last month.

Here’s the full list of dates/places for the Metal As Art tour: 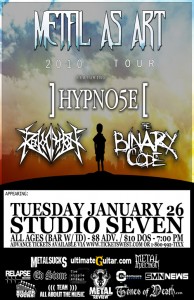