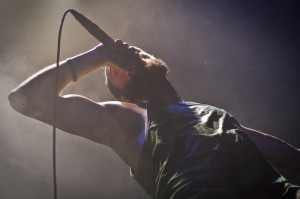 And for our fifth entry on the list, continue reading after the jump.

Today’s entry on the NCS Most Infectious list is “Meridian” by metalcore juggernaut August Burns Red. All of us here at NCS have been ABR fans for a long time and we awaited the July release of the band’s third full-length, Constellations, like a pack of slavering wolves with the scent of a fresh kill in their nostrils. (OK, maybe that was a bit over the top; let’s just say we were really looking forward to it.) And Constellations didn’t disappoint. Nor did the band’s epic live performance when they stopped in Seattle in September.

While preserving ABR’s appealing mix of melodic riffage, ferocious vocals, and judiciously used breakdowns, Constellations revealed some interesting steps forward (and away) from the band’s previous releases, most notably in “Meridian.” There’s a pronounced prog-metal vibe to this song, and some truly inspired guitar work from JB Brubaker as he rings the changes on the melodic guitar theme that weaves its way through the song. And did we mention that it’s tremendously infectious? It is. All of your NCS Authors have found ourselves going back to it repeatedly since July.

You may have noticed that “Meridian” appears side-by-side on our Most Infectious List with Goatwhore’s “Apocalyptic Havoc.” No secret that Goatwhore’s lyricism is virulently anti-religious, while ABR’s lyrical themes reflect their Christian faith. There are fans of each band that wouldn’t be caught dead (or alive) in the company of the other’s. But the only litmus test for our Most Infectious list is that the songs have the best extreme grooves of the year, and by that test both songs belong. Ben Falgoust may chant “Who needs a god when you’ve got Satan,” and Jake Luhrs may quote from Jeremiah when he howls “I will build you up again and you will be rebuilt!” But on our list, those dudes are in a fellowship of extreme metal big enough to include them both.

Without further ado, have a listen to “Meridian”:

(And the following is a little bit off-topic, but I stumbled across this Hardtimes.ca video interview of ABR drummer Matt Greiner, which impressed me. An uncommonly bright, articulate, thoughtful, kind-hearted dude. All the more impressive because of the way he handled some truly weird questions by his conspiracy-theorist interviewer.)