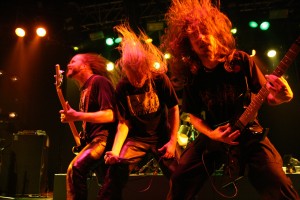 It’s the time of year when “Best of 2009” lists are popping up everywhere. As we’ve observed before, one worthwhile reason for reading these lists (and maybe the only worthwhile reason) is to discover good metal releases you might have missed — and with about 5,000 new metal full-lengths appearing annually, it’s easy to miss shit that you might really like.

Here at NCS, we’re putting a different spin on year-end listmania. Ours isn’t a list of the best metal full-lengths of the year. It’s not even our list of the best individual extreme metal songs of the year. That would tax our brains way too much work, and frankly this is the time of year when devoting serious effort to anything is just fucking difficult.

Ours is a list of the most infectious extreme metal songs we’ve heard this year. We’re talking about songs that produce involuntary physical movement. Even on a crowded bus, subway, or ferry, your head starts banging, your fingers start tapping, your foot starts thumping, your legs start twitching — different people have got different body parts that start convulsing when they hear something that’s got a groove to it.

And to be one of the most infectious songs of the year, it’s got to be something that worms its way into your brain to such an extent you can’t get it out (and wouldn’t want to) — you mentally replay it at unexpected times and you go back to the song repeatedly. You know, when the shit is sick. When it infects you like a disease with no available cure. Again, not necessarily the best of the year, but the most infectious. (And because this is NO CLEAN SINGING, it’s got to be NCS Metal or an “Exception to the Rule” to make our list.) (Read more following the jump and see our first entry on the list . . .)

We’re not going to rank our list from #10 to #1. That would be too much fucking work (see above). So, our list will be in no particular order. And we’re not just gonna put the whole list out there in one fell swoop. We’re gonna dribble ’em out one at a time. Why? Because your lazy Authors haven’t yet figured out the whole list. We’re making it up as we go along. If you want to help us, feel free to chime in (see above about laziness). 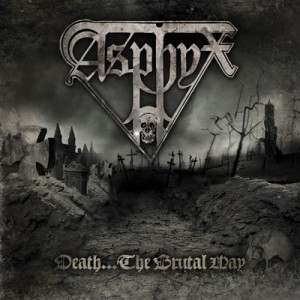 Our first entry on the list is Scorbutics by the Dutch death metal band Asphyx.  If you’re under 22 years of age, then Asphyx has been around longer than you’ve been alive — if you don’t count the 7 or 8 years when they dissolved themselves before reuniting in 2007.  Their 2009 CD Death — the Brutal Way is a classic slab of doomy death metal, but the Scorbutics track stands apart for its irresistible headbangability. The song has, not one, not two, but three awesomely infectious, chugging riffs that alternate with each other in step with changing time signatures. And Martin van Drunen’s old-school vocals absolutely slay. If this tune doesn’t produce reflexive headbanging, then you need to check yourself for a pulse.