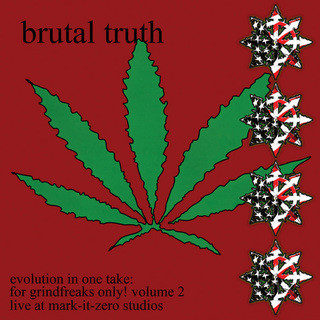 On December 23, in an act of complete randomness, we posted a piece on Brutal Truth and its 2009 release Evolution Through Revolution. It was completely random because the album came out in April, and we were only getting around to saying how much we dug it here in December. But it turns out there was some actual hot-off-the-presses Brutal Truth news we could have used as an excuse to blog about the band — except we didn’t hear about it until today. We’re clearly just a bunch of fucking slackers.

Anyway, the news is this:  on December 22 (the day before our post), Brutal Truth released Evolution In One Take: For Grindfreaks Only! Volume 2. Evolution In One Take…is the band playing Evolution Through Revolution from start to finish, in one live take at Mark It Zero studios with engineer Dan O’Hare. Per the band’s label (Relapse),  Evolution In One Take… comes with a limited edition patch and is strictly limited to 2,000 copies worldwide. Additional release details can be found here.

Not sure there’s a point to this — an album that consists of the band playing the same songs released 8 months ago, except in one take instead of with engineering. But we’re so hot for Brutal Truth (in a strictly Platonic way) that we’ll listen to it and let you know. In any event, we’re now up to date. So there.