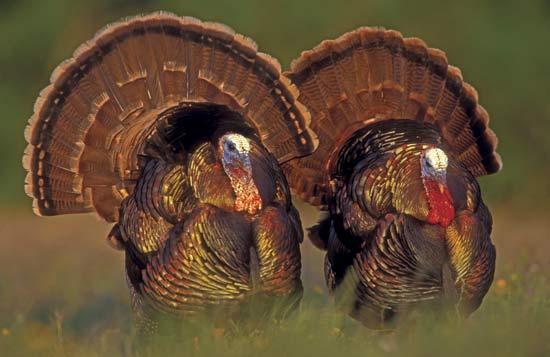 I’ve taken some shit for the photo of the slit-throat turkey I used in our posts on both Thanksgiving and Christmas Day. So this time, I picked the handsome specimens above. Still metal, and still alive (at least temporarily).

I’ve been thinking about turkey because, having finished Christmas Day dinner, my body is now about 75% turkey and I’m in a tryptophan-induced coma. I got into a debate with one of my NCS Co-Authors about whether the common wisdom is correct that turkey contains high doses of tryptophan and causes drowsiness when consumed in mass quantities. IntoTheDarkness insisted that was B.S. I insisted it was true. To resolve the dispute, I consulted The Font of All Human Knowledge. Turns out the answer is sort-of yes and sort-of no.  I know you’re dying to find out the facts. Details after the jump.

Turns out that tryptophan is an essential amino acid that must be obtained through what you eat. It’s a biochemical precursor to some important compounds, including serotonin (a mood regulator, among other things). Also turns out that tryptophan is present in most protein-based food, and is particularly plentiful in chocolate, peanuts, red meat, fish, and poultry. And the kicker is that while turkey does contain high levels of tryptophan, the amount is comparable to what’s found in most other meats.

BUT, the phenomenon of postprandial Thanksgiving and Christmas sedation (getting sleepy as fuck after you chow down on a big holiday feed) isn’t a figment of our imaginations. It’s real, and the turkey does play a part, but only a part.

When we pig out on turkey at Thanksgiving and Christmas, we’re also eating a lot of other food packed with carbohydrates. The carbs trigger the release of insulin. The insulin stimulates the uptake of certain amino acids — but not tryptophan — into the muscles. That increases the proportion of tryptophan in the bloodstream, compared to what’s left of the other amino acids after insulin has its effect. That leads to an uptake of tryptophan across the blood-brain barrier and into the central nervous system. Inside the central nervous system, tryptophan is converted into serotonin. The serotonin is converted into melotonin. And you know what melotonin does, don’t you? It makes you feel fucking sleepy!

There you have it. In a nutshell, there is such a thing as a tryptophan-induced coma, but it’s not the turkey alone that gobsmacks you into dozy oblivion. It’s the turkey plus all the carbo-loading. Aren’t you glad you asked?

P.S.  There are a couple of good band names in all this erudition: Tryptophan Coma and Postprandial Sedation. And based on some quick Googling, it looks like both names are still available.