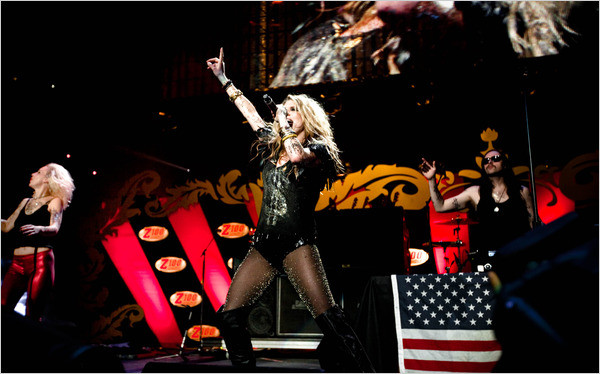 Yesterday, our post about female-fronted death metallers Bloodshoteye included a comment about the shortage of competent female death growlers howling their wares on the current scene. On the somewhat related but more general subject of last frontiers for female singers, this morning someone sent me a link to a story that popped up in today’s New York Times about a new pop star named Ke$ha and her single “Tik Tok,” which has soared to the top of the Billboard Hot 100 singles chart. The Times calls it “one of the most successful white-girl rap songs of all time.” Here are a few more excerpts from the article:

This has been a banner year for white-girl rap, as these things go. There was the debut album by the Philadelphia rapper Amanda Blank, the relentless and suffocating “I Love You” (Downtown). On “Boom Boom Pow,” the pummeling Black Eyed Peas hit, the surprise twist was a rapped interlude by the group’s singer, Fergie. Even the country-pop singer Jessie James tried it out on “Blue Jeans,” a song that practically owes a publishing check to Dem Franchize Boyz for appropriating the cadence and concept of their 2004 song “White Tee.”

The white female rapper has been one of the last frontiers in hip-hop, but Ke$ha is reframing the conversation. “Her talky, blonde-y, white-girl rap thing, there’s no one else doing that right now,” said the producer and songwriter Lukasz Gottwald, a k a Dr. Luke, who signed Ke$ha to his imprint and executive produced “Animal.”

. . . “Being that she was willing to do that, and she liked it, I’m in support of it. A whole record of that might get annoying though.”

No shit “Dr. Luke.” But “annoying” is an understated adjective. “Tik Tok” all by itself makes me wanna start clawing off my skin in big hunks like Jeff Goldblum in The Fly. Thinking about a whole album of this stuff makes me feel like vomiting until all my internal organs are in a steaming, slimy pile at my feet.

The Times observed that “The very existence of the casually rapping white girl reflects decreasingly stringent ideas about race and gender.” No, what it reflects is the increasing idiocy of popular “culture.”

“A banner year for white-girl rap”? Really, who gives a flying fuck. Yet another reminder, as if I really needed one, that whenever I venture out into the world of what passes for pop music I’m almost always morbidly sorry I did.

2 Responses to “CASUALLY RAPPING WHITE GIRLS (or, Reason #8,467 For Why We Listen to Metal)”