Yeah, I know it’s not Monday. I was working on this piece with the intent of posting it yesterday, but got sidetracked on the actual Monday morning by some provocative comments from Elise at Reign In Blonde about my weekend rant on Ke$ha. Still, I like the alliteration in the title, so what the fuck — I’m using it anyway.

And this morning I’m thinking:  Enuf about Ke$ha.  Not enuf about math metal.  Need to fix that.  And voilà! (Doesn’t mean we’re dropping the conversation with Elise.  It’s too interesting to just let it go, and I think there’s more to be said — just not right now. In the meantime, you should read her latest observations here.)

As we draw close to the end of 2009, I’ve been thinking back on some bands we haven’t written about that made the year a great one for extreme metal.  This weekend, in an (unsuccessful) effort to cleanse my mental palate of the polluting effect of “Tik Tok,” I spent time listening again to three European bands that can be classified, for want of a better term, as “math metal” — Textures, Tardive Dyskinesia, and CiLiCe — and a fourth European band I used to classify the same way that has now swum deeper into the prog metal end of the pool — Hacride.

All four have often drawn comparisons with Meshuggah. Occasionally, some writers have even branded them as Meshuggah derivatives. Unfair criticism!  They each have their own sound, successfully blending highly technical instrumental work with melody, and they each produced awesome albums in 2009. [Correction: the Textures album was released in 2008.] (More after the jump — including streaming songs from each band) 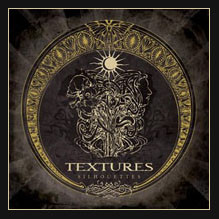 This metal band from the Netherlands is probably the best-known of the foursome. It’s also one of my co-Author’s (Alexis) favorite bands, though she prefers their 2006 release, Drawing Circles, to 2008’s Silhouettes.

The latter album has really grown on me. It’s a creative blend of intricate tempo-shifting instrumental work, headbanging riffage, and melodic passages that include a fair amount of clean singing from vocalist Eric Kalsbeek. “Awake” probably best captures Textures’ integration of these disparate elements, beginning with an infectious cleanly sung melodic overture that’s almost more pop music than metal, then shifting gears into a much heavier technical assault, which finally resolves into a reprise of the earlier melody and ends with a dreamlike synth passage.  Good stuff.

For your listening pleasure, here’s that cut from Silhouettes: 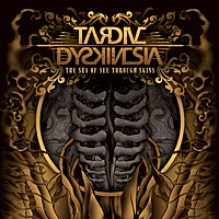 I discovered this Greek band via a review in the January 2010 issue of Decibel (published in November) which annointed it with a 7 out of 10 rating and bestowed compliments such as these:  “Tardive Dyskinesia’s kitchen sink metal is played with heart, conviction and plenty of talent. There hasn’t been a group of this caliber from Hellas since Septicflesh reemerged in 2008 with the ruling Communion album.”

Couldn’t agree more. The band’s 2009 release on Coroner Records, The Sea of See Through Skins, is a fast-paced, infectious barrage of technically sophisticated music played with genuine skill. Yes, you’ll find the abrupt tempo changes and complex time signatures associated with math metal, but the band manages to thread grooves and melody throughout that blazing tapestry. Never boring and quite addictive. These dudes deserve your attention. I wish to hell Greece weren’t so far away — I’d love to see ’em rip it up on stage.

(And in case you were wondering, according to The Font of All Human Knowledge, tardive dyskinesia is a side effect of certain medications, principally anti-psychotics, that sometimes continue even after the medicine is no longer taken. The condition is characterized by repetitive, involuntary, purposeless movements that may include grimacing, tongue protrusion, lip-smacking, puckering and pursing of the lips, and rapid eye blinking.)

Here’s a sample from The Sea of See Through Skins: 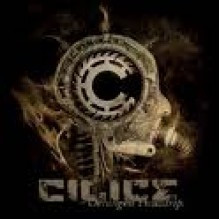 CiLiCe is another Dutch metal band, and thanks are due to Metal Sucks for turning me onto them. Their 2009 release, Deranged Headtrip, is a deranged headtrip indeed. A cacophony of start-stop rhythms, electronic samples, violins (?!), mind-blowing instrumental interplay, and beautiful soaring melodies when you least expect them.

And Daniël de Jongh’s vocals deserve special mention — they are a thing of wonder. Veering radically from hardcore-style yelling to banshee shrieking to gutteral death howling to powerful clean singing — and even jazz-style riffing, they are as much a math-metal instrument as any of the devices played by the rest of his band-mates. (I would love to see if he can pull off anything approaching this digital tour-de-force on stage.)

But let me be very clear about this: Deranged Headtrip isn’t a random collage of sounds packaged together in some kind of “let me show you what I can do” display of narcissism. There’s intelligence and craft behind each song, and the result is something that’s fascinating and incredibly appealing. I’ve listened to it over and again, and at the end I always wish there was more. Can’t recommend this one too highly.

Have a listen to this one of many awesome cuts from Deranged Headtrip: 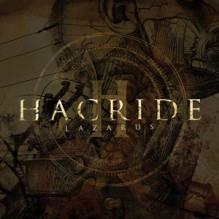 Last but not least, we turn to Hacride.  The French band’s 2007 album, Amoeba, was a fascinating mix of musical styles –- often within the same song.  One minute the band would be ripping ahead like a runaway train of technical death metal, and the next minute would break into a melodic down-tempo passage, only to gear back up into shrieking hyperdrive again.  And I’m not sure I’ve ever heard anything as crazy — in a good way — as the band’s cover of a flamenco tune called “Zambra” by Ojos de Brujo. The whole Amoeba enterprise had the sound of a big musical experiment by a very talented band still in search of its own identity. I really liked it.

I’m still not sure Hacride has found its identity, but the band’s 2009 release,  Lazarus, settles into a more cohesive and consistent sound – and the sound is mainly progressive metal. If Amoeba seemed to channel Meshuggah as much as it channeled any one thing, Lazarus more often calls to mind Mastodon. The change is far from abrupt; even on Amoeba, the band’s affinity for prog metal was evident on instrumental songs like “Liquid” and “Ultima Necat.” But Lazarus travels further in that direction.

The band’s technical virtuosity still shines, the songs are still intricate, and math-metal polyrhythms are still present. But the overall sound is more melodic and accessible.  Samuel Bourreau shows even more range in his vocals, from harsh shrieking to black-metal style deep gutturals to strong clean singing.  Overall, the album is another compelling, intricate, beautifully executed effort.

Check out this track from Lazarus: