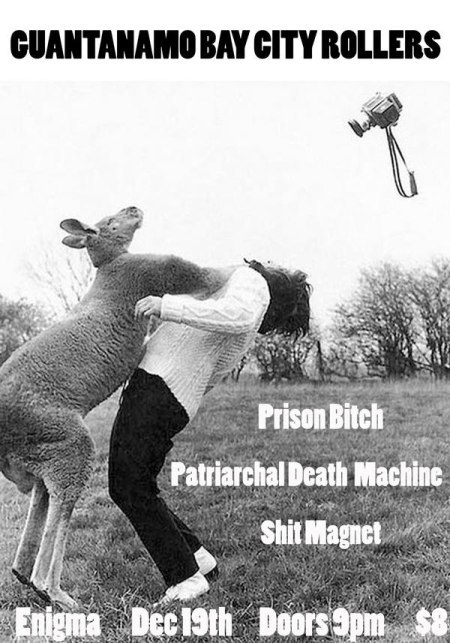 Courtesy of Blabbermouth, the flyer above and the story below.  Made me laugh.  Figured you might could use a laugh too.

Reunited Australian “grindy thrash” band GUANTANAMO BAY CITY ROLLERS returned to Adelaide’s Enigma Bar on December 19, 2009 for the first time since supporting INSECT WARFARE there on February 22, 2008. The group’s lineup was the same as it was for the 2008 concert:

A fun time was had by all, with a crazy moshpit, tequila shared around the crowd, and Chappy wearing nothing more than a novelty crocodile head G-string for most of the show, all in celebration of Cheese‘s 30th birthday.

I like these dudes already. I’ve always felt there should be more crocodile-head G-strings in live metal, and how can you go wrong with a band fronted by guys named Chappy and Cheese? And wouldn’t it be cool to mosh with a kangaroo?

The band is streaming some songs from their debut album Alcoholocaust on their MySpace page. There’s a really nasty photo embedded in the music player on that page, but if you can get past it, the tunage is actually a pretty damn good mix of grind, punk, thrash, and power violence. I also found 3 more tracks that aren’t on MySpace and appear to post-date Alcoholocaust. Check ’em out below. If you’re not drunk already, they’ll make you wanna get that way. (Aptly descriptive track titles too.)

In One Ear Out the Asshole

I Want To Be Anthony Callea

And who, you non-Aussies may ask, is Anthony Callea? Go here and then you’ll know.