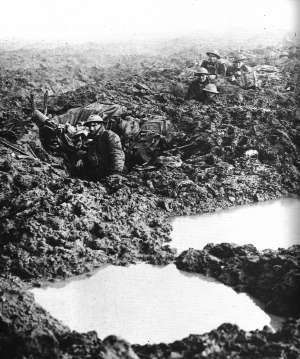 I listened to it this week for the first time — only nine months late — and was utterly blown away. The music is sick — the best this band has done in eons. But that’s only part of the story. This is one of those rare metal albums with a concept and lyrical content that are completely integral to the music and that turn what you hear into  something profoundly more powerful. “Epic” is an overused word, but truly, that’s what Passiondale is. (more after the jump)

I used to be morbidly mesmerized by histories of World War I. I still would be — except for the fact that I have the attention span of a hummingbird. As a monument to man’s capacity to destroy his fellow man, only World War II has exceeded its horrors.

Sixteen million people were destroyed in that conflict and an additional 21 million were wounded. It is almost literally true that the war wiped out an entire generation of men in Europe. The military forces of the U.S. alone sustained more than 320,000 casualties (killed and wounded).

As an example of warfare, World War I fell across the threshold between two worlds, one in which ranked lines of soldiers traded fusillades of musketry fire and mounted cavalry made glorious charges, and another world in which mustard gas blistered the skin, blinded the eyes, and caused weeks of suffering before inevitable death — a new world in which soldiers were shredded by machine gun fire, bombed from the air, and crushed by mechanical tanks. All of those things, from both worlds, happened in World War I.

One of the most horrific battles of that war was fought for control of the village of Passchendaele near the town of Ypres in West Flanders, Belgium.  The British launched massive attacks, without any decisive success until the Canadian Corps took Passchendaele in November 1917. The result? The Allies had captured a mere 5 miles of new territory at a cost of 140,000 combat deaths — about two inches per dead soldier.

And then five months later the Germans recaptured the ground they had lost, without resistance.

Passchendaele became a symbol of “grinding attrition warfare” and the heedless sacrifice of human life by inept military commanders. It would have remained a symbol of senseless sacrifice to this day, except with the passage of time, most people now know nothing about it. The last surviving veteran of the battle, Private Harry Patch, died last July. 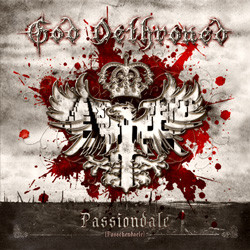 How many extreme metal bands have constructed an album of music around World War I? I can think of only one — God Dethroned.  But it was an inspired decision.

Where did the idea come from? The band’s founder, songwriter, and guitarist/vocalist Henri Sattler said this in an interview:

“I got the idea when I visited our former guitar player Isaac Delahaye. He lives in the city Ypres in the south of Belgium. This city is full of war memorials and war graves of World War One. This impressed me so much that I started doing research about it and that impressed me even more! So I decided to write a concept album about the war. I’m a total history freak anyway and in our previous albums we usually had one song that had to do with a historical topic, but this time I found a challenge in doing a whole album about it.”

Not your typical approach to metal songwriting, but as I said, it was an inspired decision.  The music on Passiondale is a blend of groove-oriented death metal, melodic death metal, black metal, and even some unexpected but fitting injections of clean singing from guest vocalist Marco v.d. Velde (The Wounded).  The songs are powerful and memorable — and the sound suits the subject matter.

The lyrical content — which you can actually hear, even in Henri Sattler’s gutteral vocals — encompasses the appalling disconnect between the optimism of wide-eyed soldiers marching off to glory and the slaughterhouse to which their path will take them — the destructive fury of an artillery bombardment, the horrors of advancing into machine gun fire over “no man’s land,” the devastating effects of poison gas, the gruesome phenomenon of men drowning in mud and being crushed by tanks, and the eventual collapse of European monarchies and a whole way of life triggered by the war’s devastation.

This isn’t the kind of “battle metal” that celebrates mythic conflicts and glorious acts of heroism. This album musically captures the fury of war, the human carnage, the pain and desperation, the horror, and ultimately the anguished and abiding sense of loss. The songs are in the main fast-paced and brutal, but threaded with melody and infused with a deep sense of compassion.

This is a rare achievement, and one we highly recommend if, like us, you managed to get through 2009 without checking it out. Below you can stream a sample from the album, which includes these lyrics:

As I watched them in bright daylight
When crawling through the poison clouds, I saw them burn away
My name should have been written between theirs on stones
In dreams I still see, hear and smell them every single night