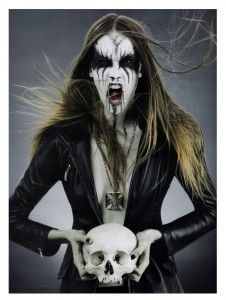 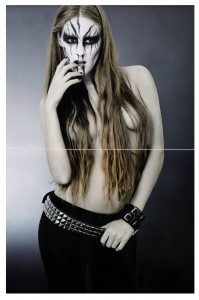 Okay, now that we have your attention:

On December 15, the New York Times ran a story about an academic symposium held in Brooklyn called “Hideous Gnosis,” which explored intellectual aspects of black metal. We posted some generally disrespectful commentary about the event, and got some thought-provoking reactions. We posted a follow-up piece earlier this week about one of the papers delivered at “Hideous Gnosis,” which analyzed whether it’s even possible for someone who buys into a black-metal worldview to talk about black metal.  Today we’re continuing the discussion – but this time with a surprise contributor.

NCS welcomes, as our first guest writer, our favorite metal blogger from New Zealand — Steff from STEFF METAL. We’ve already written about her blog, which you owe it to yourself to check out, and she kindly accepted our invitation to add her wit and wisdom to NCS (because we could definitely use more of both). And unlike your NCS Authors, Steff is a black metal maven.

To set the stage, we got this comment on our original rant about “Hideous Gnosis” from a writer named Shinjuku Thief:

“I would disagree with your assertion that metal, particularly black metal, is about expressing emotion. What characterises a lot of BM, for me, is the absence of emotion . . . . I think although you scoff at anything remotely ‘intellectual’ you’re espousing a theory of your own . . . . That is the contradiction of metal, it claims to be primal, atavistic, earthy, of the body, but in reality it is so controlled, has so many codes, rules and boundaries that the fans in a supposedly unthinking manner enforce at every level. . . . [I]ts not spontaneous or relying on our innermost urges, its a well honed aesthetic and conscious action that is very much thought about.”

So, with that intro, here are Steff’s thoughts (after the jump):

NO CLEAN SINGING is doing an awful lot of talking about Black Metal, and it’s good.

Look, I’m a huge black metal fan, and I can categorically say that most black metal is shit. The only reason people listen to it is that a) they like the idea of black metal more than the actual music, b) they have no eardrums and c) the 2% that is NOT shit, is fucking amazing. It’s beautiful. It’s magical. It’s otherworldly. It’s the soundtrack for the end of the world. Black metal is pure fucking Armageddon.

Many people point out the contradiction in black metal, (an observation lobbed at the Gothic subculture for the last twenty years), that while it seeks to be a chaotic force of disorder, it actually creates it’s own rules, therefore contradicting it’s supposed chaos. It’s a valid statement, but when you separate black metal music from black metal subculture, the contradiction doesn’t actually exist. Whether you should separate the two is an entirely different discussion. 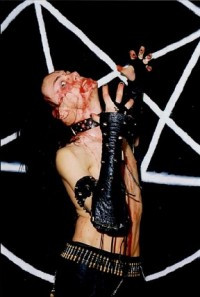 Black Metal is exactly as it claims to be: base, primal, atavistic, of the body, bleak. It speaks of harsh landscapes, forgotten gods and battle-hardened warriors. There are emotions present: dissolusion, anger, revenge, lust, hatred, loyalty and above all, pride. Without emotion, I don’t think black metal – good black metal – would grab us in quite the way it does.

But this sort of music creates a subculture, mainly because it’s so anti-mainstream that those who listen to it are active in seeking out others who share their views. The emotions that make black metal appeal to us also make us want to find others – other warriors, other barbarians – to drink beer and listen to Deathcrush with. More and more people come together, and you have bands and concerts and a subculture, and you have rules. Rules about what to wear, what to say, which bands are good, which aren’t. There have to be rules, because there is a them and an us, and we have to be able to recognize our own. We have to know what side you’re on.

So, we could sit around, and talk about Black Metal, or we could listen to some Black Metal. I know which one I’d rather do. [editor’s note: Steff picked the song below for your streaming pleasure — so listen dammit!]

P.S. Your NCS editor lifted the photos at the top of this post from Steff’s blogsite.  She found them from a 2008 shoot done by Antonella Arismendi for D magazine, aptly titled “Black Metal Barbies.”