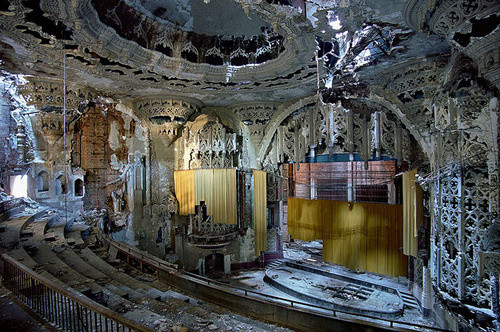 I shall not today attempt further to define the kinds of material I understand to be embraced within that shorthand description [“hard-core pornography”]; and perhaps I could never succeed in intelligibly doing so. But I know it when I see it . . . .

Yesterday, while wasting my fucking time expanding my mind on the Internet, I came across one non-musical thing after another that made me think, “that’s metal” — from a cool New Zealand metal site, to abandoned buildings in Detroit, to rugby, to hakas, to Nelson Mandela, to poetry. Allow me to share (after the jump).

First, I discovered a web site called STEFF METAL. It’s the brainchild of a woman in New Zealand named Steff (calm down dudes, she’s married). Steff knows how to write, and her blog is full of cool stuff that’s “metal,” even if it isn’t always about music. (Yes, Steff linked to a couple of our posts, but we’re not vain enough yet to use that as the sole criterion for cool sites; otherwise, there would only be about 3 cool sites on the Internet.) Steff’s site is definitely metal. Go check it out and tell me if you disagree.

One of the items in Steff’s latest post is about a series of photos of abandoned buildings in Detroit. Following her link took me to this place, where I saw 11 fucking amazing photographs (including the one at the top of this post of the United Artists theater) by two dudes named Yves Marchand and Romain Meffre.  From that place, I followed a link to the photographers’ own site, where more awesome photos of Detroit’s deterioration can be found.  I think there’s something beautiful in the ugliness — which makes it “metal.”

The fact that Steff is from New Zealand caused me to think about the end of Invictus, a really good movie I saw over the holidays about true-life events. Much of the movie builds toward a World Cup rugby match hosted in South Africa in 1995 between South Africa and New Zealand. Rugby is brutal, which makes it metal — a bunch of burly animals without pads running over each other non-stop for two 40-minute halves and then getting shit-faced afterwards. 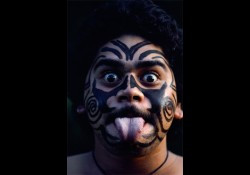 And if there were any doubt, the All Blacks perform a haka, which is a Māori war dance, before each international match. The haka has been closely associated with New Zealand rugby ever since 1884. You can see it at the end of Invictus. More immediately, you can see a sample below. It’s in-your-face, it’s over-the-top, it’s warlike. It’s definitely metal. What’s particularly cool is that the poor fuckers on the opposing team have to stand there and take it. Odds are, they’re about to get their asses kicked too.

Then, thinking about the movie Invictus, I tracked down the poem for which the movie is named. It’s by an English poet named William Ernest Henley, who died in 1903.  While imprisoned (for 27 fucking years), Nelson Mandela kept a copy of the poem on a scrap of paper and referred to it often. In the movie, after becoming president of his country following those 27 fucking years in prison, he gives the poem to the captain of the South African rugby team before its match against the All Blacks. The last two stanzas read as follows:

Beyond this place of wrath and tears
Looms but the Horror of the shade,
And yet the menace of the years
Finds and shall find me unafraid.

It matters not how strait the gate,
How charged with punishments the scroll,
I am the master of my fate:
I am the captain of my soul.

Nelson Mandela is metal.  So is that poem.

Final word:  STEFF METAL also included a link to this piece of brilliance, which imagines what it would be like if Star Wars was on Facebook.  I wouldn’t call it “metal,” but it’s fucking hysterical.

You may now return to your regularly scheduled programming.