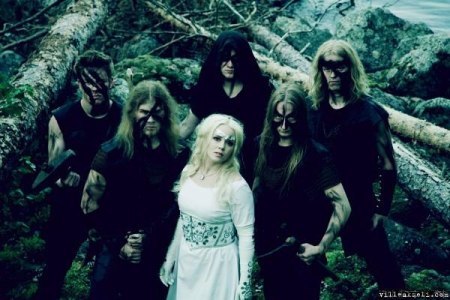 I saw the video, was impressed, tracked down the CD, and remained impressed. It’s a fast-paced, dramatic combination of symphonic death metal, celtic folk stylings, savage gutteral vocals from Joni Koskinen, and soaring sopranos from crystal-voiced Leeni-Maria Hovila. Heavier than you might expect, with memorable melodies and plenty of hard-driving riffs.  (more after the jump, including that video. . .)

Late last year the band toured the U.S. with Eluveitie, Belphegor, Alestorm and Vreid as part of “Heathenfest America,” and according to a blog post on New Year’s Day, they’ve finished recording their second album and are now mixing it in anticipation of a 2010 release.

We haven’t written much about pagan/folk metal on this site since we launched a couple months ago, but that doesn’t mean we don’t like it.  We do!  Even when it includes a heavy dose of clean singing along with the growling, as Kivimetsän Druidi does.  We’ll be looking forward to their second full-length in the new year.

Now here’s the video, and after that, more words about the other two bands we overlooked: 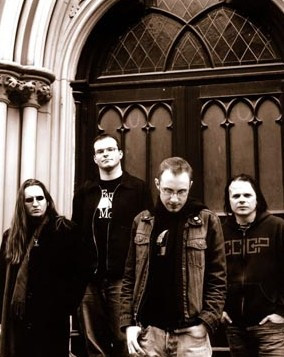 This Portland band has been around since 1995 and has produced an assortment of EPs and three full-lengths, the last of which was Ashes Against the Grain in 2006.  The band accurately describes its music as follows:

Despite their style being firmly grounded in the dark metal genre, Agalloch has always been a band who prefers experimentation over settling on a niche. The result has been three full-lengths and a handful of EPs that have bridged the gap between gothic doom, black metal, neo-folk, post rock, and industrial/ambient soundscapes. The band has earned a rabid cult following over the years due in part to their artistic & independent attitude, elusive aura, and scarce but volatile live performances.

In an interview, the band’s principal song-writer John Haughm described the concept behind Ashes as “a surreal tale that begins with mankind cutting off an arm and both legs and creating a flood of blood that covers the earth, changes natures patterns, and destroys humanity at the end so that everything can be reborn anew.”  Agalloch’s music is often considered a meditation on the power and purity of nature, but according to Haughm, “I was more fed up with humanity than I was enamoured by nature when I wrote this album.”

So what can we expect from the band’s long-awaited follow-up to Ashes? According to an interview Haughm gave to German TV last May, “expect the unexpected.” Haughm says that the next release will be “completely different” from its predecessors — “a bit darker,” closer to black metal, but with the same kind of dynamics that Agalloch is known for.  As for when we can expect the new album, Haughm said that he hoped it would be out by May 2010.

Agalloch produces passionate, highly original music, and we’re really looking forward to their new burst of creativity.  In the meantime, check out this sample of brilliance from Ashes Against the Grain:

Agalloch: Not Unlike the Waves 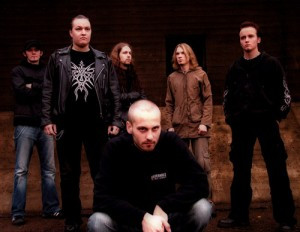 Mors Principium Est is another Finnish band, whose name roughly translates to “death is the beginning,” and my Co-Author Alexis brought them to my attention about this time last year.  MPE has three full-lengths to its credit, the last of which was 2007’s Liberation=Termination.  The style is recognizably Gothenburg melodic death metal, and comparisons to bands such as Dark Tranquillity are inevitable.  But MPE is a collective of unusually talented musicians who play with power and precision and deserve to stand in their own spotlight.  Their discography has no weak spots.  Every album has been a head-turner, including Liberation=Termination, which included more pronounced experimentation with synthesizer-driven electronic beats and melody.

What will come next is a more than typical mystery, because since the recording of Liberation, Jori Haukio, the band’s main song writer and guitarist, decided to part company with MPE. Regardless, this is a band that has never disappointed in the past and we’re confident that whatever comes will be worth the wait.  To see what we mean, check out this cut from Liberation=Termination: