In the meantime, if you’re not familiar with the band, allow us to introduce you to them and to the unique album they dropped on an unsuspecting world last year. (continue reading after the jump . . .)

Originally formed in 2001 under the name “END,” Eryn Non Dae subsequently changed vocalists, recorded an EP in 2005 called Never Ending Whirl of Confusion, and released Hydra Lernaïa last summer.  Before that release, the band signed to Metal Blade records and changed their name to Eryn Non Dae, while hanging on to the acronym END (which we’ll also use here).

Hydra Lernaïa is an ambitious, dark, densely layered, often violent undertaking. It explores nine destructive emotions that human beings try to control or eliminate but that, like the many heads of the mythical hydra, persist in coming back. Driven by that concept, the band sought to make the album a single, integrated listening experience, instead of just a collection of unconnected songs — and they succeeded. While each song can be heard standing alone, interesting things happen emotionally when you listen to the album straight through. 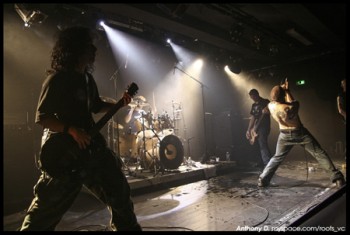 END’s sound on Hydra Lernaïa reflects the acknowledged influence of Meshuggah in the complexity of the drumwork, the math-metal rhythmic complexity and tempo shifting, and the staccato bursts of heavy chugging in the riffs. But the music has a less controlled, more chaotic, more emotional feel to it than we get from much of Meshuggah’s repertoire. Alternating between brutal headbanging heaviness and shrieking turbulent intricacy, the music has a very experimental, discordant, anarchic vibe. It’s dense, intense, grim, sharply angled, and often surreal.

Mathieu Nogues‘s vocals are reminiscent of the kind of higher-range hardcore vocals you’ll find in Converge, but include spoken-word interludes, chanting, and electronically altered passages — all geared toward combining with the instrumental work to create a particular mood or emotional impact, whether it be rage, fear, despair, or resignation.

Most of the songs are fast and furious, but even the real pummeling blasters include unexpected, slower instrumental interludes or concluding passages that bring a pronounced prog-metal or doom flavor to the banquet. “Lam Tsol Oua” is a purely instrumental piece that begins with bleak ambient noise and evolves into a moody, synthesizer-driven melody, while the concluding song, “Pure,” is a discordant, mid-tempo, experimental piece that clocks in at over 10 minutes in length and displays little of the tempo-shifting so much in evidence elsewhere on the album. It’s more a series of variations on an a drone-oriented apocalyptic theme. 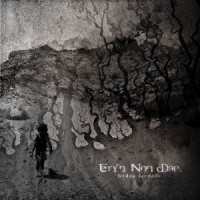 Hydra Lernaïa is an adventure in the unexpected. It’s obviously the product of considerable thought, extensive work, and a high level of technical proficiency in the playing — nothing less could have succeeded in realizing on such an ambitious game-plan. This is dark math metal with brains as well as brawn, and emotional power as well as rigorous complexity. And in that sense, Hydra Lernaïa achieves a kind of “balance,” but it is “balance” at its most extreme.

Not long ago we read a superb piece posted by Daath‘s Eyal Levi on the Metal Sucks site. Among other things, he said this:

“The more I go on the more I appreciate and respect bands that play real music, whether or not I listen to them. . . . Most people in bands completely underestimate the audience. They think that they need to dumb down their sound to make it suitable for mass consumption. . . . Seems like people forget that this is metal, not pop or mainstream radio rock. . . . You can do whatever you want in music, just be great and honest with it and at it, and the audience will come. True artistry wins. . . . I’m hoping this means that we’re transitioning into an era in metal where bands that have real, challenging, fearless music to offer are taking the cake.”

When he wrote this, Eyal could have been talking about Eryn Non Dae. Hydra Lernaïa is “real, challenging, fearless” music. We’re anxious to see what these dudes do next.

Before you go, check out this artistic video of END’s “The Decline and the Fall.”  Its swirling colors and flashes of disturbing images suit the music quite well. And be sure to come back to NCS tomorrow for our interview with END in Part 2 of this feature. You’ll find some interesting info about where END has been, where it’s going, the band’s creative process, and even some interesting recommendations for other metal being produced in France.