For our detailed review of the performances and a big collection of our amateurish photos, continue on after the jump . . . .

This tour had the misfortune of landing in Seattle on a Tuesday night, with no bands on the line-up that have yet become household names in the community of extreme metal. The unfortunate result was a pathetically small crowd. But those lucky souls who made the wise decision to turn out for it were eye-witnesses to something extraordinary.

And the bonus for us was the opportunity to shoot the shit with guys from the first three bands on the bill as they joined the audience following their sets. Not only are all these dudes enormously talented musicians, but they’re also bright, friendly, knowledgeable people who are completely dedicated to their craft and to their fans. They played as if their audience numbered in the thousands instead of in the dozens.

Another bonus from the sparse crowd was the chance to get a front-and-center perch in the balcony bar at Studio Seven, which afforded a good vantage point for photos (and we’ve added a bunch to this page down below the verbiage).  Now if only we had a decent camera and knew what the fuck to do with it . . . . 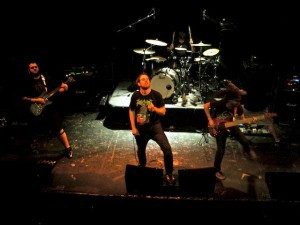 This band from Jersey dives deep into the technical/progressive side of death metal, with intricate song structures, frequent tempo shifts, unexpected atmospheric guitar soloing, and occasional jazz-flavored interludes.  It’s the kind of music that demands a high level of technical skill and complete integration among the performers. We loved the band’s recently released full-length debut, Suspension of Disbelief, but really wondered if they could carry off their high-wire act in a live performance.

Well, any such doubts were erased at Studio Seven: These guys delivered a virtuoso set of music. At least to our ears, the playing was impeccable — and the sound quality was so good that the contribution of each instrument (and the vocals) was clear and distinct.  In other words, no place to hide mistakes or sloppiness.

The instrumentalists played with assurance and tremendous energy. It was particularly impressive to watch all the fingers flying across the fretboards like deranged spiders, anchored by Umar‘s machine-like drum work. And Mike Apprich‘s vocals were equally impressive.  What made this tight performance all the more extraordinary was the piece of news we got from awesome guitarist Jesper Zuretti later that night, i.e., that the two touring musicians in the band (bassist Brett Bamberger and rhythm guitarist Todd Stern) had only been practicing the set with the rest of the guys for a month before the tour started. And speaking of impressive, Bamberger looks like he’s having an epileptic seizure on stage but somehow manages to lay down some shit-hot bass riffs.

One other thing came through in the live performance even more powerfully than on the band’s CD — this music is some stone-heavy shit.  There’s a lot of muscle in the sound to accompany the brainy convolution, and man did that come across.

In short, these dudes delivered a knockout punch. With support from a decent label and more exposure from additional touring opportunities, they’re going to sell themselves big time. (I’m still in disbelief that they remain unsigned. Surely that’s got to change — and change soon dammit!) 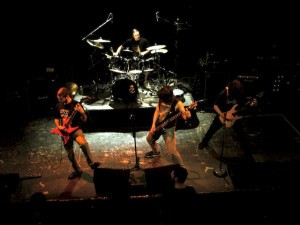 Revocation was the other band that drew us to this tour, and after the strong start from The Binary Code, we were in a right good mood as these Bostonians took the stage.  They wasted no time, launching directly into high gear and delivering the tech-infused death/thrash for which they’re already making a big name for themselves.

As was true of The Binary Code, these tech-heavy thrashers were as tight as could be. All the parts meshed together in well-oiled syncopation, and the sound was clear enough to focus on each piece of the instrumental machine. Again, no hiding from inspection – their playing was all out there on naked display, and these dudes really delivered.

David Davidson‘s shredding was particularly memorable. He was blazingly fast and creative, and he really captured the spirit of what this brand of music is all about. We also really got into the trading of vocals back and forth between Davidson’s higher-pitched shrieking, and bassist Anthony Buda’s deeper gutturals.

This was some high-energy, in-your-face headbanging fun from some guys who are finally getting the recognition they deserve after years of hard labor.  A kick-ass performance! 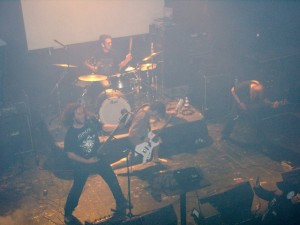 I feel genuinely conflicted about this French band’s set. On the plus side: Their show was extremely polished and immensely entertaining. The music is an accessible blend of avante garde experimentation, technical tempo-jumping, tribal rhythm (a la Gojira), prog metal, melodic ambience, and heavy, headbanging riffage. Veering between hypnotic mood music and crushing grooves, Hypno5e creates some very interesting noise

And as for the production quality, it was Las Vegas-comes-to-Studio-Seven: a fog machine working overtime, sophisticated lighting, a video screen displaying haunting images, superb sound quality managed by their own technician, interesting use of electronic samples and pre-recorded choruses, and constantly entertaining stage antics — including the bass player’s cavorting through the crowd, darting up the stairs to the balcony-bar, and dragging his bass down the stairs, all the while continuing to pump out the rhythms as the rest of the guys played on stage.

But here’s the rub: To be brutally honest (and that’s the only kind of honest we know how to be at NCS), we’re pretty sure frontman Emmanuel Jessua was lip-syncing. We don’t know how else to explain it when the vocalist-guitarist steps back from the mike to dig into a riff and his voice continues to come out of the speakers as if nothing had changed.

Don’t know for sure if it was just that one song or all of them, and we don’t want to go overboard about it because maybe there’s a good reason we’re unaware of. But if there isn’t, it hurts this band and it disrespects the other vocalists on this tour who are putting themselves out there, doing the hard work under pressure every night instead of taking the easy way out.

Jessua seems like a good dude, and we do dig the band’s music, so we’re hoping there’s a good explanation. And if there isn’t, we hope the fucking lip-syncing stops.

UPDATE: In response to the above comment about lip-syncing, we received the following message from a person associated with the band:

I caught you posted some coverage on the Seattle show – thanks for spreading the word. I wanted to ask where you got the lip syncing impression from though??  Emmanuel doesn’t do any lip syncing.  The band does play to a click track so their music is in sync with the video projections and samples, but no lip syncing involved whatsoever.  I understand it all comes down to personal opinion, but I really don’t want any false rumors going around.

If we misunderstood what we were seeing, we stand corrected. 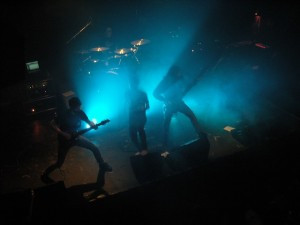 As Studio Seven sometimes does for its weeknight lineups, it saved the local band for the last slot of the evening. I had a ridiculously early morning ahead for my day job and nearly left before these dudes played their set — and man, would that have been a tragic mistake! This is a Seattle band, and I should have known better, but I didn’t.

Fortunately, I stuck around — and was completely blown away. “Epic” is an overused word in our community, but it truly suits the music that 7H7E delivers. The music is atmospheric but technical, with a crushing low end from the bass and drums serving as the platform for a combination of melodic guitar soloing and dissonant riffs and a layering of recorded melodic synthesizer tracks at strategic points.

It’s some mesmerizing shit! Think of the stylistic characteristics of Meshuggah, Swallow the Sun, Textures, and Animals As Leaders melded together. We’re not saying this band is quite yet a full member of that pantheon, but they play some original music and play it extremely well.

This quintet (which includes two pairs of brothers) has a 2007 EP to their credit (which I need to check out) and they’re working on a debut full-length for 2010. That’s one album we’ll be eagerly looking for. This is another band in need of a label, and we gotta believe they’re gonna get one!

And now, feast your eyes on our collection of photos from the January 26 show in Seattle: 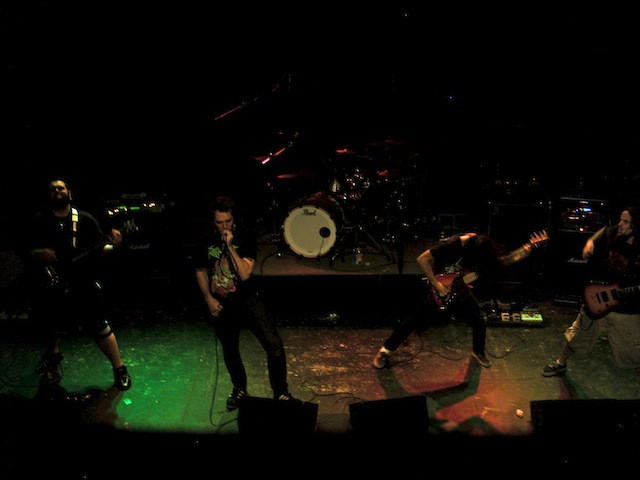 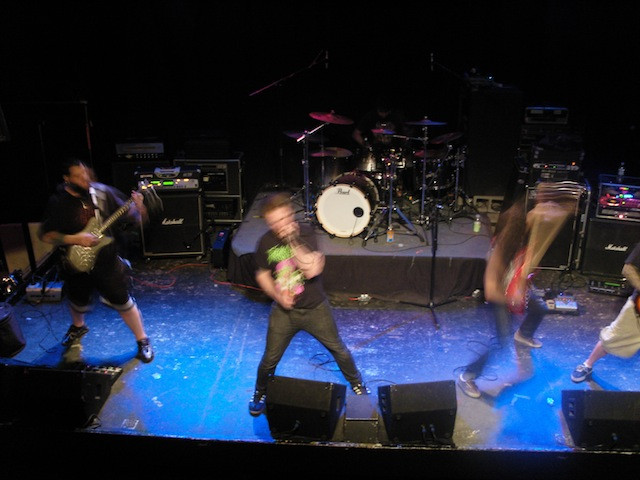 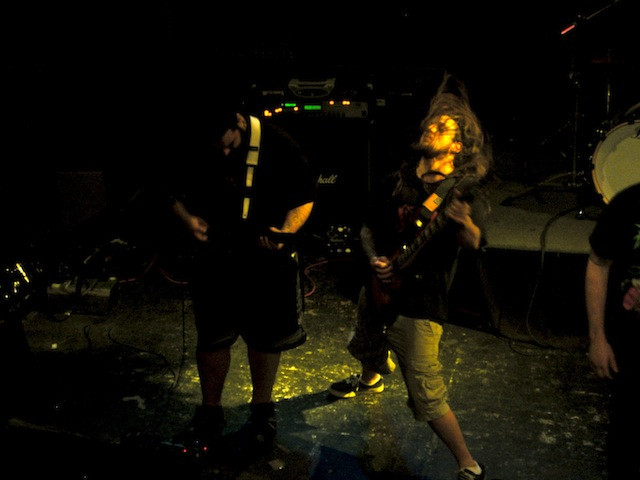 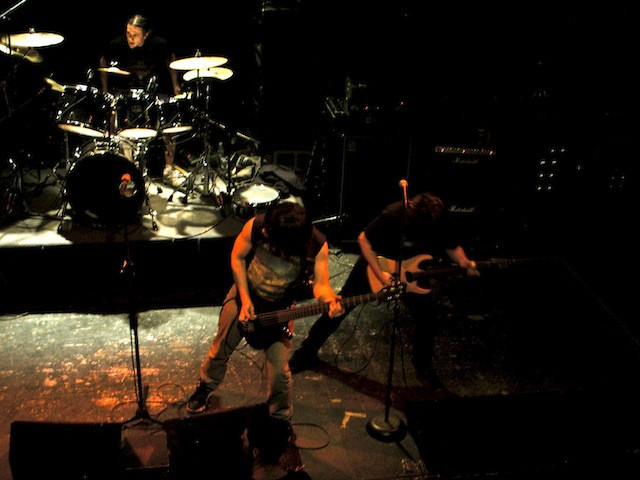 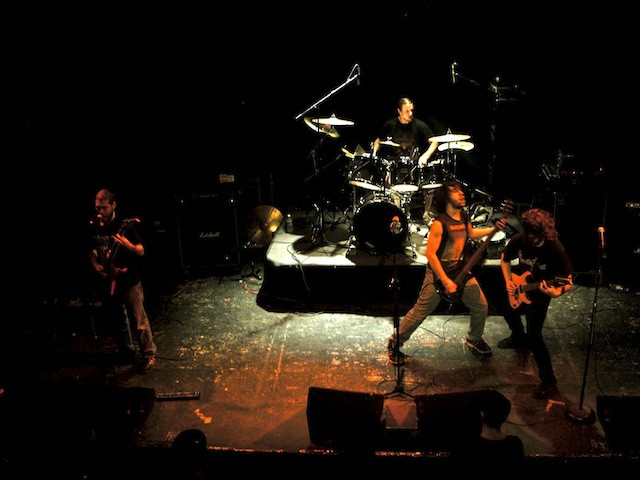 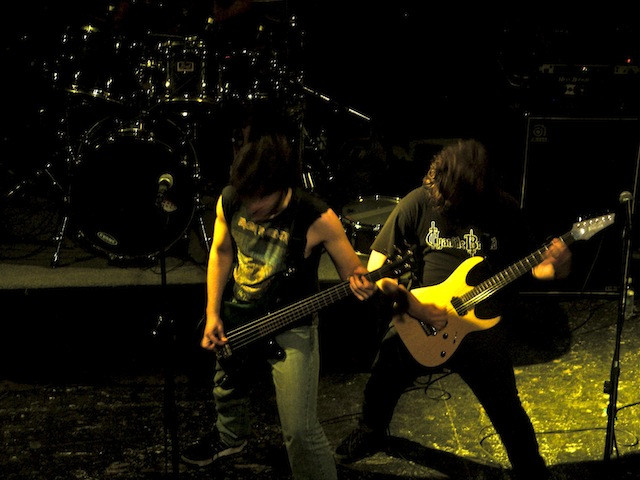 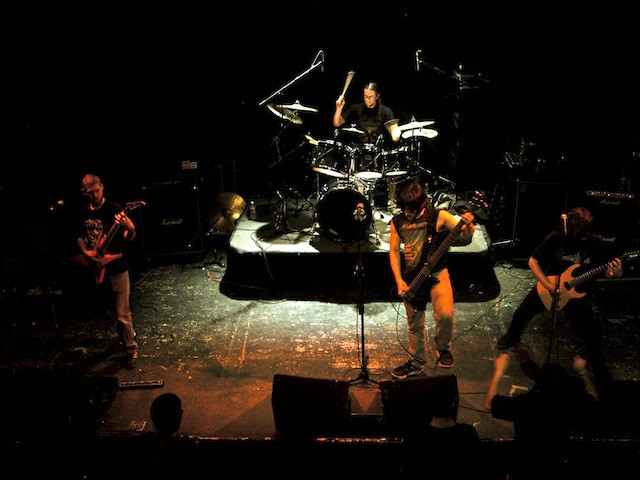 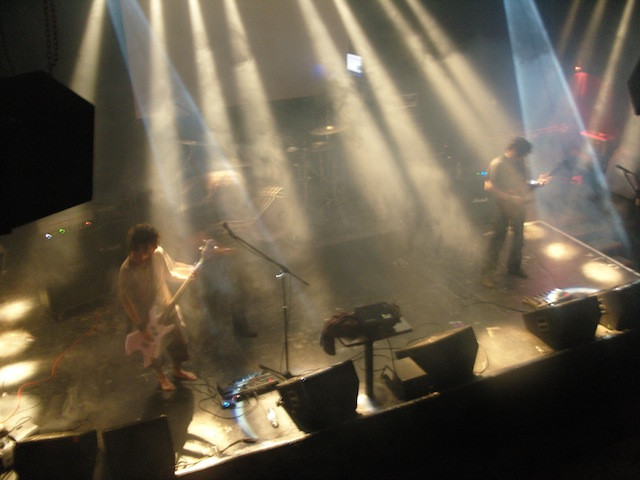 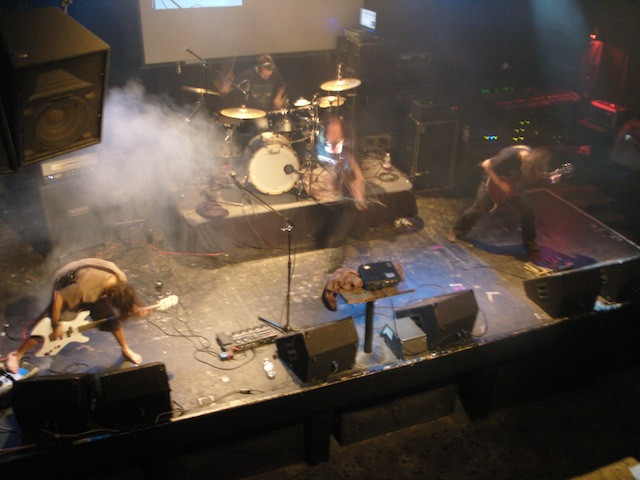 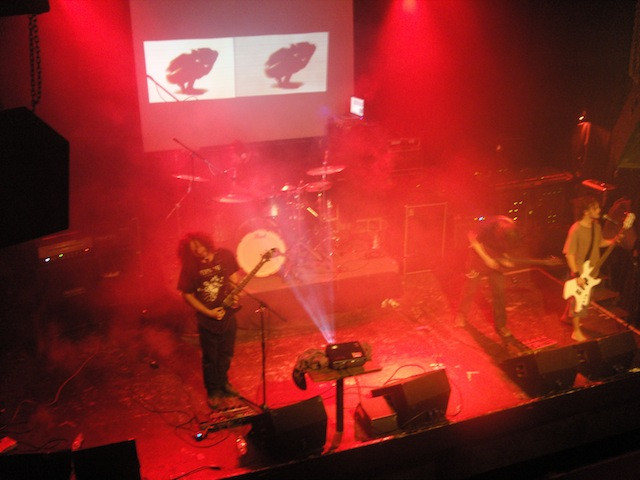 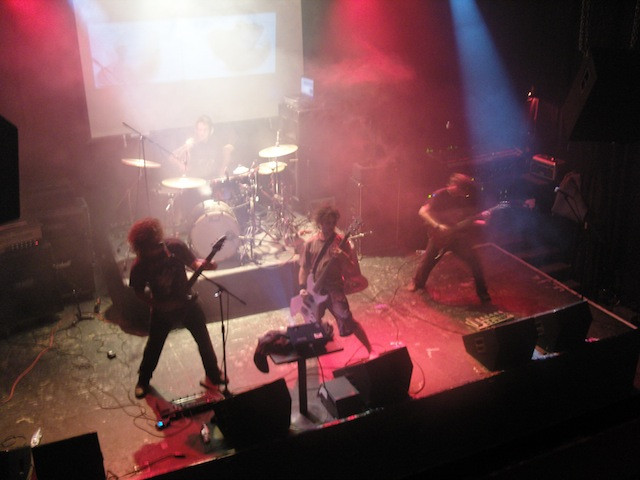 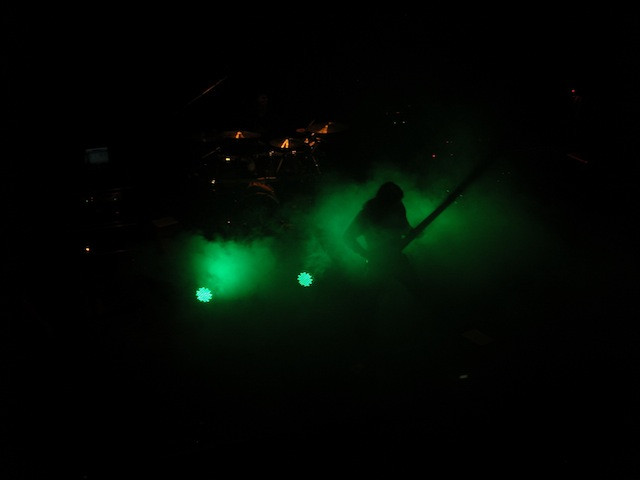 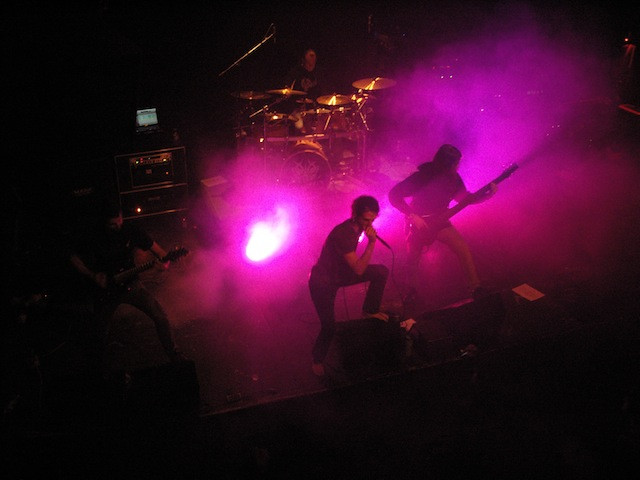 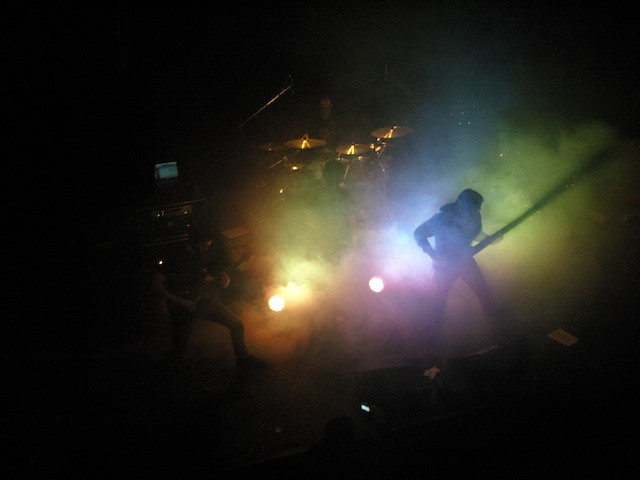 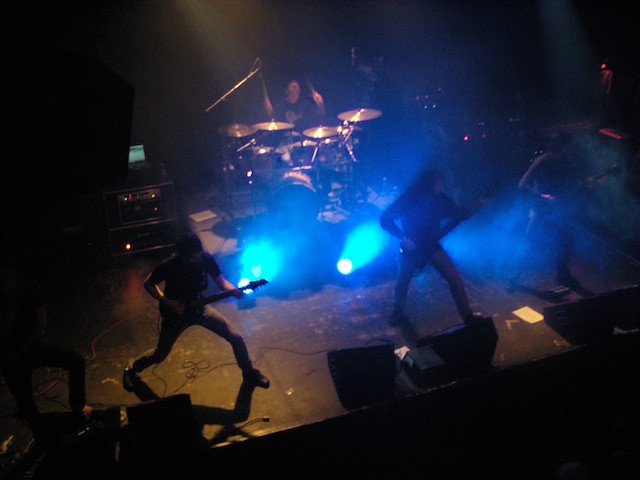 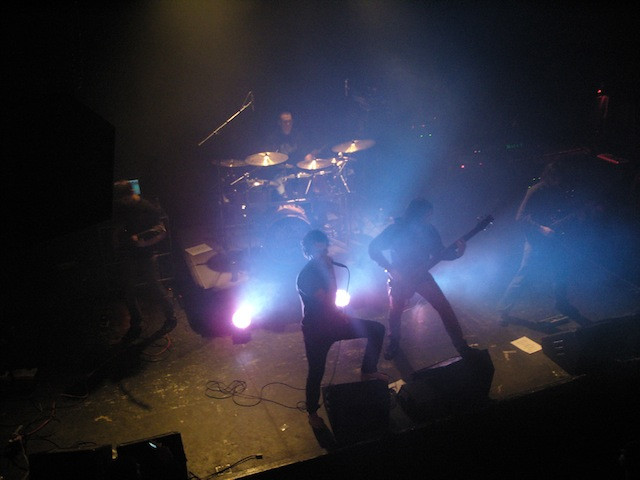 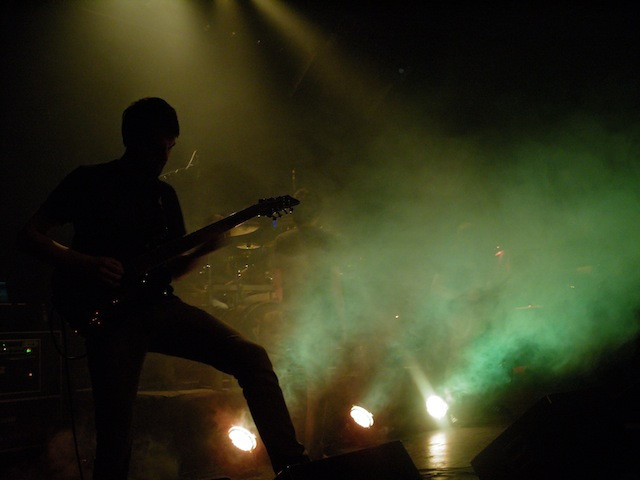 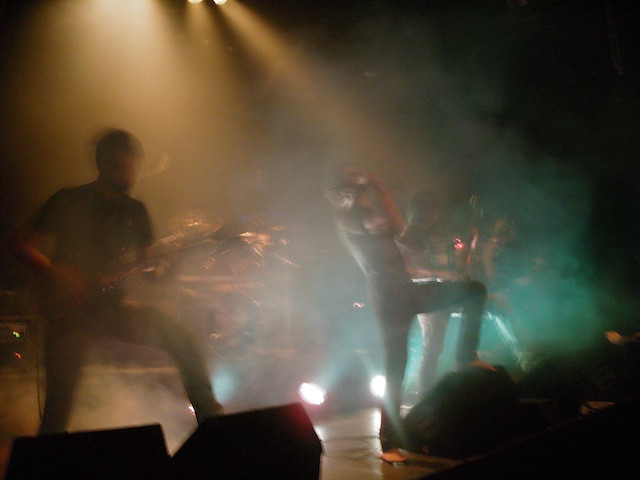 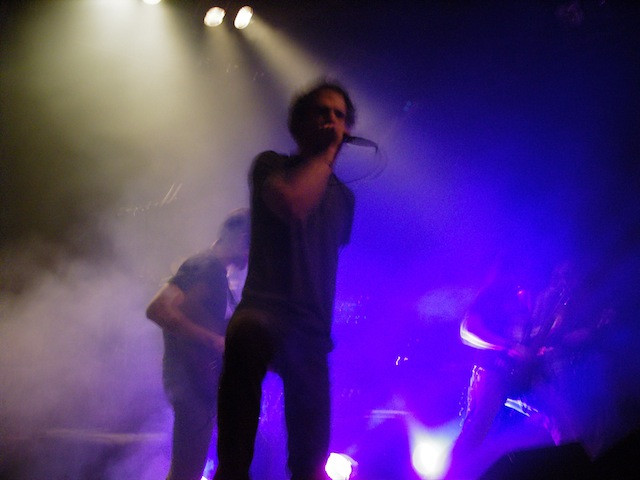