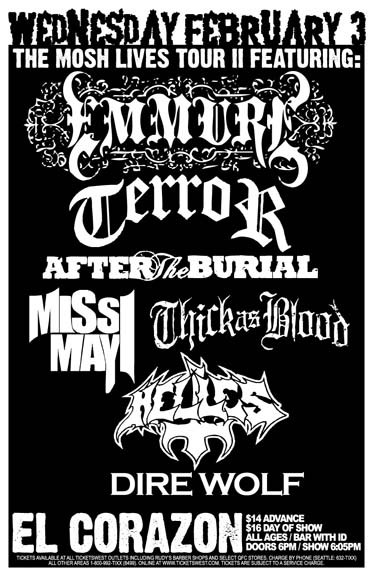 Ah, the visceral* joys of live Core — as in hardcore, metalcore, and deathcore. Some of the best bands in each of those genres are featured in the current MOSH LIVES II tour, and your three NCS Co-Authors were there when the tour hit Seattle’s El Corazon on the night of February 3. We bring you this report and a batch of our usual amateurish photos.

(*Visceral: from the Latin word viscera, referring to the internal organs of the body, specifically those within the chest or abdomen. Definition from the Merriam-Webster Dictionary:

1.  Felt in, or as if in, the viscera
2. Not intellectual
3. Dealing with crude or elemental emotions
4. Of, relating to, or located on or among the viscera)

Man, talk about getting your money’s worth. Emmure, Terror, After the Burial, Miss May I, Thick As Blood, and local bands Helles and Dire Wolf. In a word, this show was epic. (read more after the jump . . .)

Core music is really meant to be heard live, in packed clubs fully of adrenaline charged moshers, with the band and the crowd feeding off each other’s energy. That’s because the music is, well, visceral. It doesn’t engage the brain so much as it taps into the most elemental emotions — it kicks you in your gut and then shakes you by the scruff of your neck. It beckons you to abandon yourself to its stomp and flow. Listening to Core music on a recording is just never going to duplicate the live experience. And as live Core experiences go, we got just about all we could have wanted with Mosh Lives II. 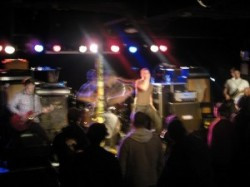 DIRE WOLF: This 5-piece band from Seattle opened the night strong with a high-energy set of mid-tempo, groove-oriented metalcore, with some interesting variations that included slower-paced, almost sludgy instrumental passages. Fun to watch and fun to hear! Worth keeping an eye on these dudes. (As you might expect from a 6:00 start, El Corazon was still filling, and not much was happening on the floor yet.)

HELLES: Another local quintet, hailing from Tacoma, Helles has a bit of an identity crisis. They churned out some high-powered, thrash-flavored metalcore, but then without warning would grind to a near-stop with lengthy, ultra-slow instrumental interludes that unfortunately just weren’t that interesting, though they did succeed in putting the brakes to some building crowd energy. Overall, the band just didn’t make much of an impression on any of your Authors. (El C was still not filled; some moshing started briefly, but then petered out.) 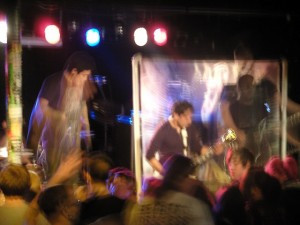 THICK AS BLOOD:  Now this is more like it! Breakdown city! Might as well confess now – none of your NCS Co-Authors is all that into hardcore, though both IntoTheDarkness and I really liked this Florida band’s 2007 album, Moment of Truth. (None of us picked up their  2009 release, Embrace – though I’m ready to  do that now.) Thick As Blood played a hard-driving, powerful set, with some punishing breakdowns – and the moshing finally started in earnest – though El C still wasn’t yet filled enough to prevent the hardcore dancers from doing that arm-windmilling, manic-stomping, flying-leg-kick crapola. 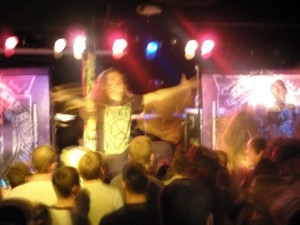 MISS MAY I: Breakdown city again!  All three of us caught this Ohio metalcore band’s act last July in Portland as part of The Artery Metal Tour with Carnifex and Impending Doom, and they really impressed. They were even better this week – just a shitload of hi-octane fun! Tremendous energy on stage, and non-stop, fast-paced music with huge hooks and hammering breakdowns that finally got the mosh pit roiling. The El C crowd was really into this band, and so were we. (Even though many of the songs included clean singing by Ryan Neff to complement Levi Benton’s accomplished howling, we’re making an allowance.) 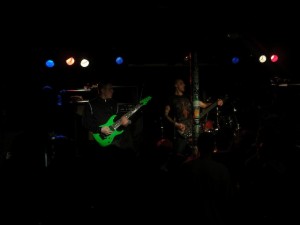 AFTER THE BURIAL: To be honest, this Minneapolis band is the main reason we turned out for this tour (it’s really the only reason Alexis showed up, and she left soon after the set finished.) All of your Authors count the band’s 2008 Sumerian Records release, Rareform, as one of our favorite albums of the last five years, and we’ve seen them live twice before. The previous live performances were great, but ATB have continued to hone their live act, and this week it was over-the-top awesome. (IntoTheDarkness now ranks it as one of the best live performances he’s seen, second only to Gojira, and Alexis and I were blown away, too.)

On Rareform, ATB created a collection of distinctive, memorable songs that integrated intricate rhythms with infectious grooves – music that appealed to the brain as well as the viscera. On stage, they play those songs with blast-force power and complete instrumental synchronization. Every one of the musicians has impressive skill and focus, and frontman Anthony Notarmaso has really come into his own as a charismatic ringleader (not to mention that he’s got great vocal power). These dudes had the crowd completely whipped up, and the pit action was non-stop.

Oh, I forgot to mention: Breakdown city again – big time! All of us expect a mild case of whiplash tomorrow morning.

Most unusual song introduction of the night (by Notarmaso): “I’ve got a serious question for everyone.  Would you rather have ping pong balls shoved up your butt ‘til you can’t shit any more – or would you rather hear a new After the Burial song?”  And the dude then actually asked for a vote, one option at a time. Fortunately, option two passed by a large margin. That’s not the kind of vote you want to lose.

By the way, the new song, “My Frailty,” is a real face-ripper – it’s got that distinctive ATB combination of Meshuggah-like rhythms and infectious grooves and includes some amazing dual-guitar shredding by guitarists Justin Lowe and Trent Hafdahl. 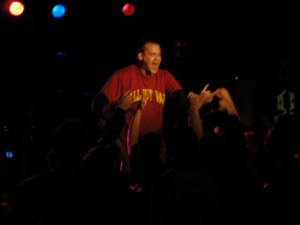 TERROR: Breakdown city (again)! This L.A. hardcore band has been around since 2002, but the band members were fixtures in the undergound hardcore scene for years before that, and they all know how to rip it up in a live show. Frontman Scott Vogel is a kick in the ass to watch, with the same kind of wild, non-stop stage banter we associate with Frank Mullen of Suffocation. He got the crowd good and worked up and issued repeated demands for stage-diving.

And man, did he get his wish!  During most of the set, the mosh pit consumed the stage as much as the floor. At any given moment, there were more paying customers up there than there were band members, including dudes and ladies from the audience taking the offered mike from Vogel to belt out vocals themselves. Hell of a show! 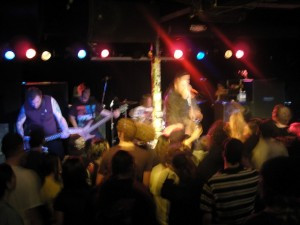 EMMURE: This band from Queens was our first introduction to live deathcore when we caught them in February 2008 at this same venue. On that occasion, they were a support act on The Doomsayers 2008 Tour headlined by Darkest Hour, playing right after Whitechapel and right before Cephalic Carnage. They were relative unknowns at the time, but delivered a throat-grabbing set and cemented a special place in our memories.

IntoTheDarkness and I were big fans of the band’s first two full-lengths, Goodbye to the Gallows (2007) and The Respect Issue (2008), but we gotta be honest – we were really let down by last year’s release, Felony. We’re all in favor of musical progression, but some of the changes on Felony seemed forced (change for the sake of change) and Frank Palmeri’s use of rap-style vocals was also a disappointment. The dude’s got a powerful voice with remarkable range, but it seemed wasted on too many of the Felony cuts.

But all is now forgiven, because Emmure reminded us why we still vividly remember that set from two years ago – they can really bring the heavy shit on stage! And of course they’re even more polished and entertaining now, with two years of touring behind them and a big audience of rabid fans to stoke the fire. They played a lot of our old favorites from the earlier albums, and even what they played from Felony sounded pretty fucking good.

And did I mention the breakdowns? Probably the heaviest of the night – some deeply viscera-vibrating thunderclaps of force. Hated to see their set end.

Well, that’s our report.  And now, here’s a batch of our crappy photos. One of these days we will either (a) get a better camera, or (b) figure out the features of the one we have. But not today. Probably not tomorrow either . . . . 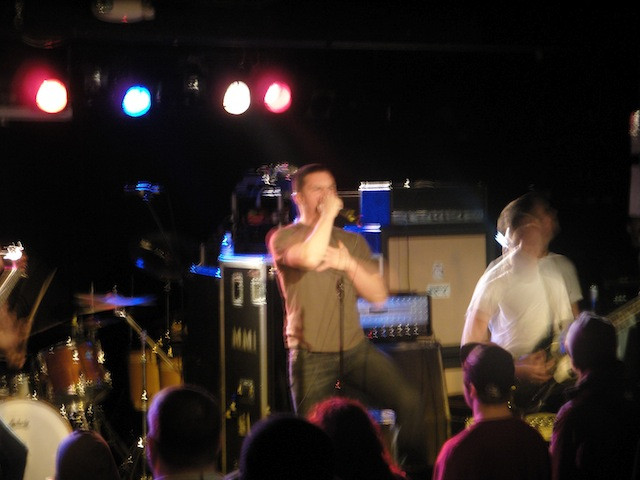 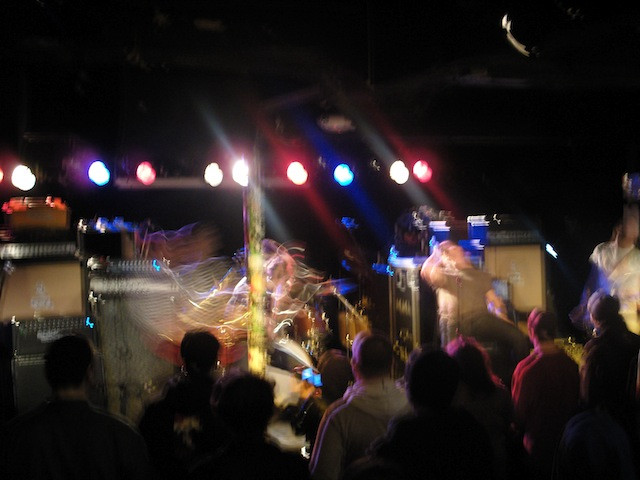 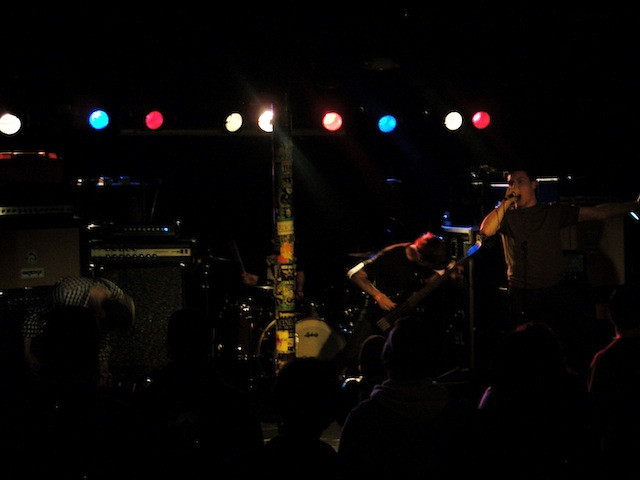 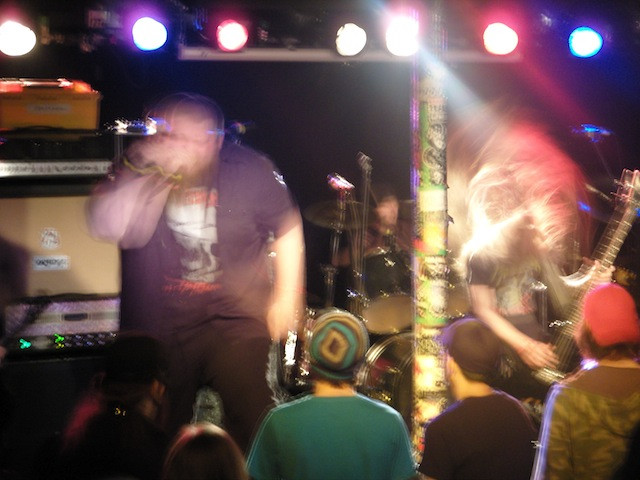 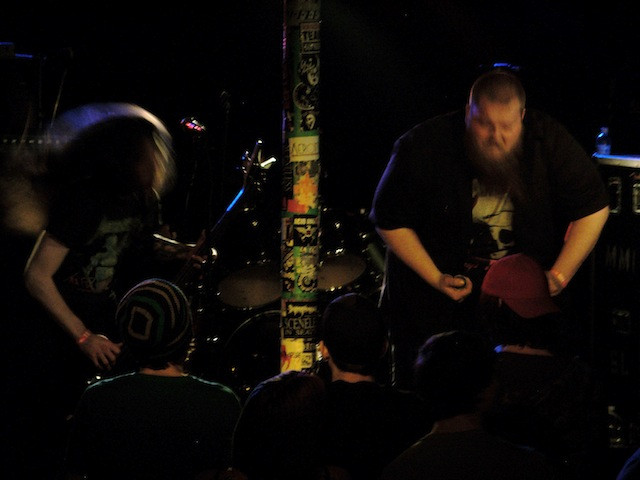 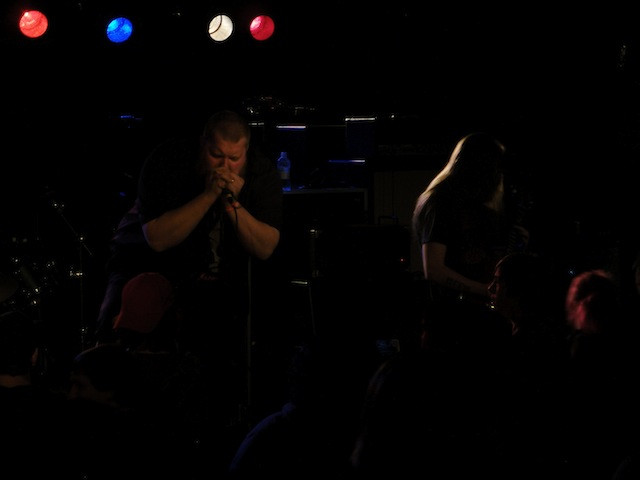 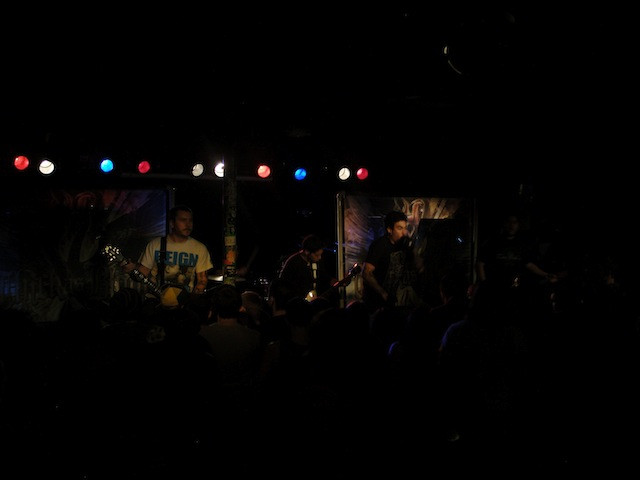 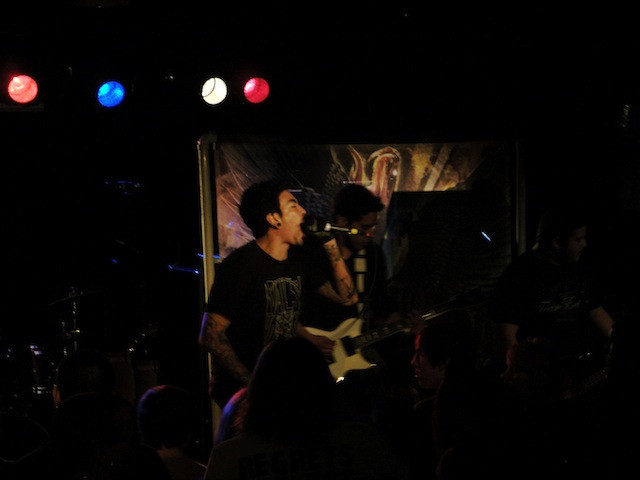 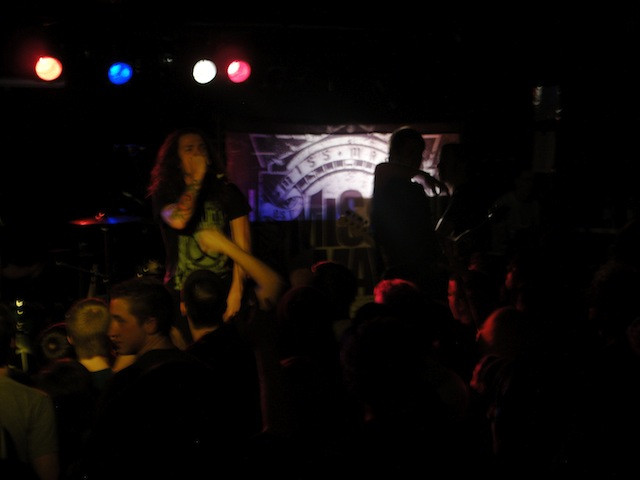 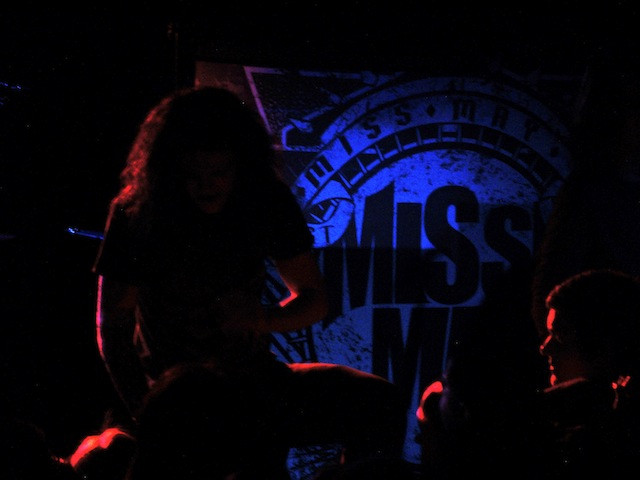 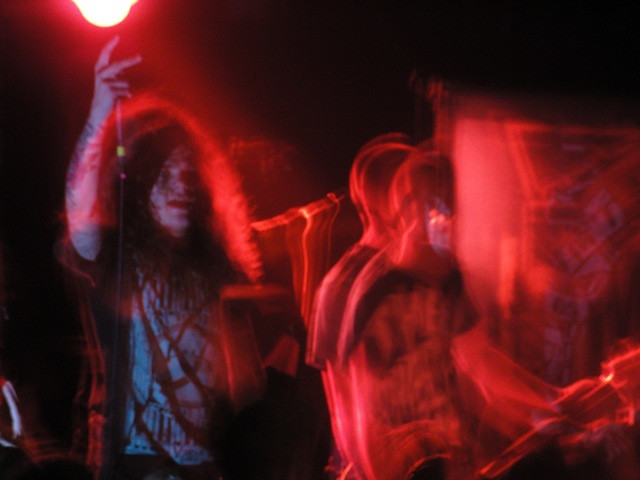 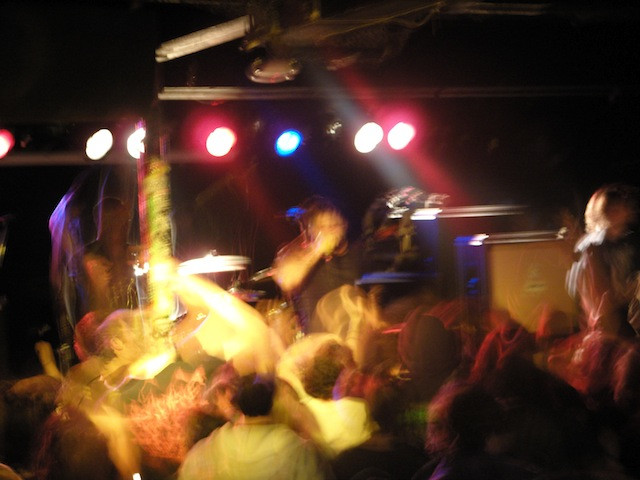 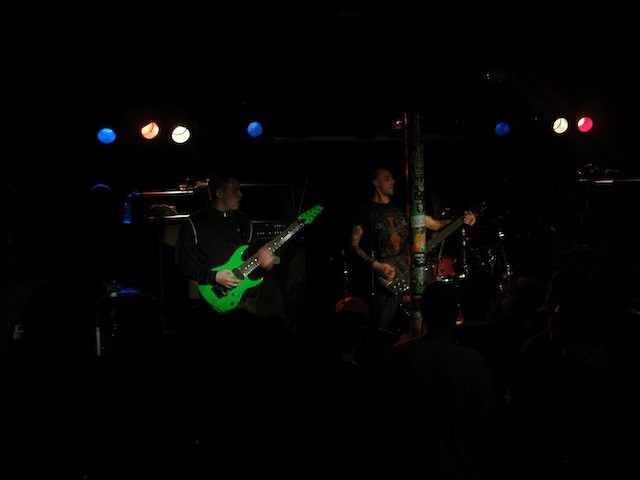 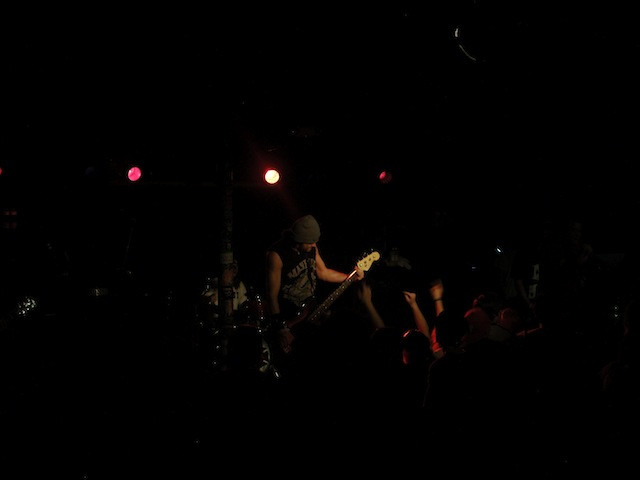 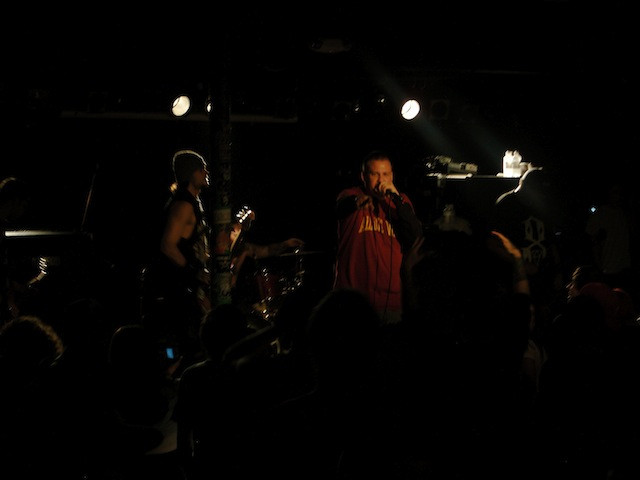 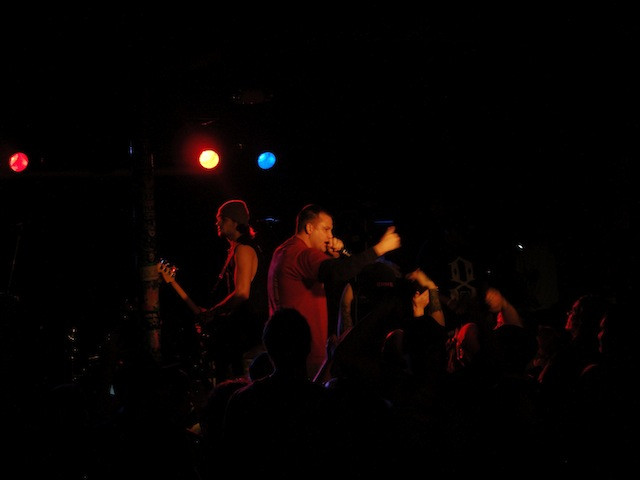 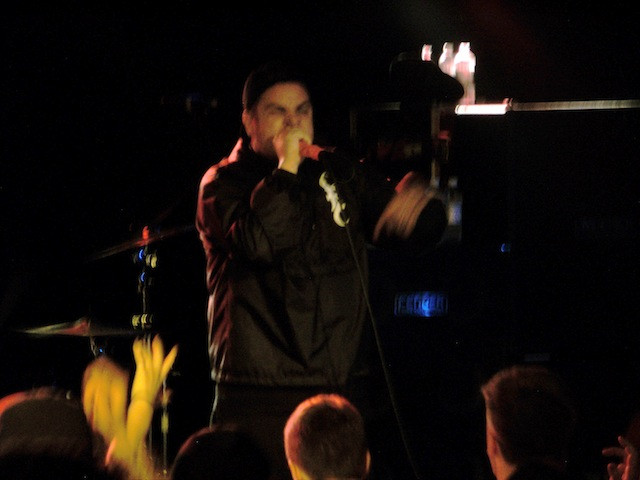 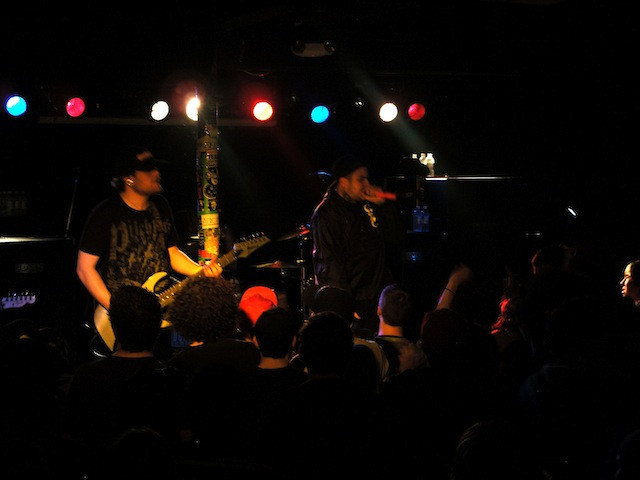 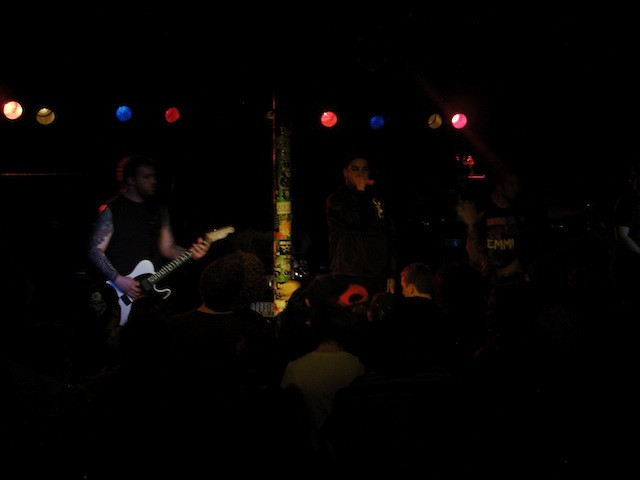 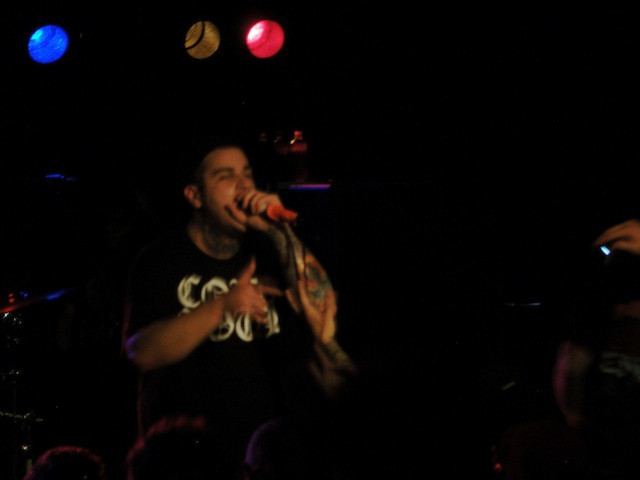