Lots of DTG‘s devoted followers have wondered when the band would actually release an album, and others have wondered if Argon would hook up with some other, more established band in need of a vocalist. That speculation was fueled at one point by Argon’s decision to join the Russian brutal slam metal band Abominable Putridity for some live shows in Moscow last summer, and he appears to have recorded one-off vocals for some other bands, including this one for unsigned Indiana blasters Dissever the Tyrant. But Argon has been in no hurry and seems just as dedicated to finishing his education as expanding his death metal horizons. (continue reading after the jump . . .) 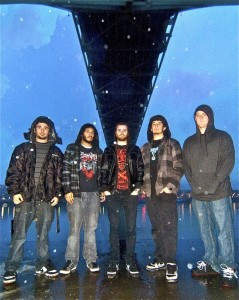 Enter Burning the Masses.  NCS Co-Author IntoTheDarkness originally turned us on to this San Diego band’s 2008 Mediaskare debut Mind Control. It’s an awesome and varied collection of vicious death metal marked by hi-speed technical complexity in the instrumental work, slamming breakdowns, blistering guitar solos, and unexpected bursts of melody (including flamenco-flavored guitar instrumentals, of all things). In our humble opinion, BTM is more than the equal of better-known bands like Suicide Silence and Job For A Cowboy.

THE BREAKING NEWS: We liked the vocal work of BTM‘s frontman David Montenegro on Mind Control, but it turns out that he and the band parted company in December. You can guess where this is going — and you’d be right:

On Friday, Burning the Masses announced on its MySpace blog that Cam Argon would be joining the band as vocalist. Even better, he’ll be the vocalist on the band’s new album, Offspring of Time, which is supposed to hit stores this summer via Mediaskare Records.  According to the band’s MySpace blog, we can expect something different from Mind Control.

We’re not sure what that means, but all we really need to know is that it will be a collaboration between Cameron Argon and Burning the Masses, and in our book that’s about as close to a “can’t miss” as you can get — a marriage made in hell (ya know, in a good, death-metally way). 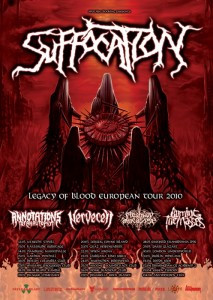 More news: Argon is joining Burning the Masses just in time to embark with them on a European tour in March called LEGACY OF BLOOD with death metal legends Suffocation. Accompanying them on the tour will be Annotations of An Autopsy, Nervecell, and Fleshgod Apocalypse.

Now that is one mind-fuckingly awesome lineup! Where’s the damn teleporter machine when you need one?

The tour is scheduled to stop in Holland, Germany, Poland, Slovakia, the Czech Republic, Austria, Slovenia, Italy, Switzerland, France, the United Kingdom, Ireland, and Belgium (but sadly, not Seattle).

Not a bad gig for Cam: Scream your guts out and see the world! And not only that, see the world with fucking Suffocation! Some people just lead a charmed life, don’t they?

THE INTERVIEW: These news items left us with all sorts of questions. Being the nosy pests that we are, we reached out to Big Chocolate over the ether, and the dude was good enough to give us some answers (for which we’re grateful):

NCS: How did you hook up with BURNING THE MASSES?  We’re guessing you could have joined any number of bands — why this one, and why now?

A month ago, I get a message from Chris(guitar in BTM) asking if I was just down to jam because they were looking for a vocal replacement. We jammed a few times and I was impressed with their new style and their musicianship. I’m taking this semester off school while I wait for my state residency to pass to make school a lot more affordable. In this waiting period I wanted to really experience the music scene, and not just make music from my bedroom. So this seemed like a good opportunity.

NCS: Are you involved in writing songs for the forthcoming BTM album?  And can you give us a hint about what the new music will sound like? BTM‘s blog says it will be “much different” from the last album.

They had all the songs written when they contacted me. I wrote all the lyrics a week prior to going to portland to record and placed all the vocals to the rough drums tracks in our room with my built in mic on my macbook. Haha! Their newer sound is a lot more solid and “metal” than their last. I would compare deeds of flesh and whatnot. My vocal style is a little different on this album than most of my fans are probably used to. I use a lot more “solid” lows rather than using my more guttural tone. Haha! But don’t worry, my guttural stuff is on it. I guess you guys will just have to wait till we debut a song on their myspace to find out. 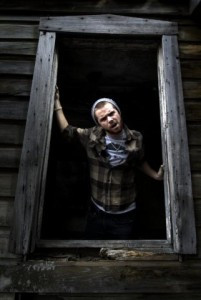 NCS: You’ve always been involved in other projects, including DISFIGURING THE GODDESS. Do you still plan on creating new DTG music, or is that project on hold?

DTG is NOT on hold. I’m finishing up writing the new album now, I only have about a track or two left. Joe(Guitarist) will be revising and rewriting my guitar in the songs while I’m in europe touring with BTM. And Phil(drums) is getting ready to record as well. We plan to hit the studio in April/May for an early fall release. I’m so stoked on the new material. The album writing process for this album is: I’m writing a bunch of songs (guitar/drums/vocals) so I can control the structure and overall pace/feel of the tracks, I’m calling them “pre-pre production” tracks. And then joe is adding color to my black and white sketch. He’s already done with one track and our process is a huge success. I really like the way it ended up.

NCS: Last time we checked in with you, you were studying criminal justice. How are you planning to reconcile your work with BTM and the tour with schoolwork?

I’m only taking this semester off as of now, and i’ll be returning full time in the fall. Before I joined and agreed to do the new BTM album, I let the band know that after the europe tour that I wanted to keep my options open and not be a permeant member just yet. I have my dedication I owe to DTG and my Solo music and not too mention my school. I basically want to see how it goes and how I feel about my role in BTM; and this is a great opportunity to experience doing music like this.

NCS: Is there any other news or thoughts you’d like to share with our readers at this point?

I have a vocal competition going right now on my youtube channel, so if you do vocals; please go check it out. (http://www.youtube.com/watch?v=6jFxSDOUEnY) I have some other news in the works, but you guys will just have to stay posted with me to find out. ;D

THE MUSIC: At the outset of this post we invited those of you who have no idea who any of these people are to stay with us anyway. So it’s only fair that we give you a sample of what they sound like when they get amped up and let the shit fly. So, for your listening pleasure, here’s a taste of Cam Argon’s work with Disfiguring the Goddess, followed by two tracks from Burning the Masses‘ 2008 full-length debut, showing different sides of the band’s music.  And then, as a preview of what this hellish marriage is likely to produce, check out the video of Big C tracking vocals for the new BTM release.

Disfiguring the Goddess: Teeth of Emultion

2 Responses to “A MARRIAGE MADE IN HELL: BIG CHOCOLATE AND BURNING THE MASSES”