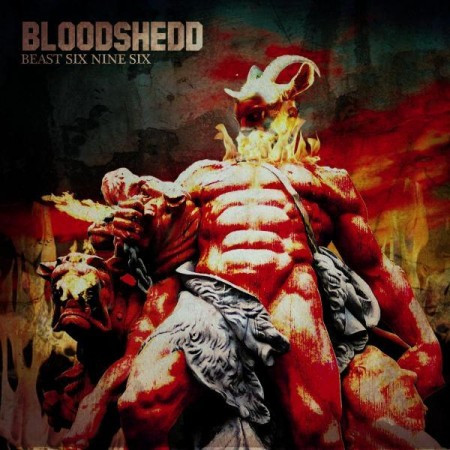 Jojo Book supplies the vocals, and he’s got the kind of raspy, higher-range shrieking tone that brings to mind Mikael Stanne (Dark Tranquillity) or Tomas Lindberg (At the Gates) — and we don’t drop those names casually. So far, so good — but there’s a helluva lot more.  (read on, after the jump . . .) 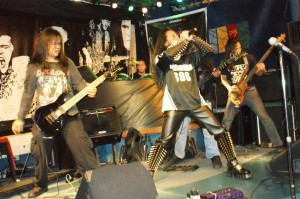 Now, add again to the mix that Toots Book does mind-boggling work on the drum kit. His percussive assault is not just inhumanly fast, it’s also inventive and complex and it meshes in well-thought-out fashion with Santiago’s hammering bassline.

But here’s what really sets Bloodshedd apart: Though most of the songs blaze ahead with pummeling fury, there’s something unexpected and interesting that happens in all of them — whether it be the jazzy, down tempo riffs that appear unexpectedly in “Collective” and “Leading the Dead,” or the ominous electro-industrial tones of the instrumental “Time to Change All,” or the math-metally time signature shifts and polyrhythms that occur in “Spare No One” and “Destroy Heaven,” or the blend of funky interludes, screaming experimental noise, and fusion jazz guitar that somehow coexist in “This House of Termites.”

Trust us on this: If Bloodshedd were in the U.S. instead of the Phillipines, they’d be turning heads far and wide. They’ve sure spun our heads all the way around! This is blazingly creative music played with passion and top-shelf skill.

Currently, Bloodshedd is in the process of writing and recording for their third album on Tower of Doom Records.  You can check out the music at their MySpace page — or just listen to the example below (though no one song will really tell you what the rest of the songs sound like). If you like what you hear, Spare No One is available on iTunes.