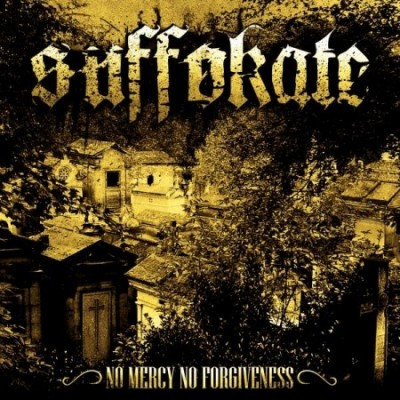 That’s the one-word review our NCS Co-Author IntoTheDarkness conveyed about Suffokate‘s just-released new album, No Mercy No Forgiveness. Actually, I guess that’s really three words. Anyway, to justify our existence, I thought I probably needed to flesh out that review just a bit. So here goes:

And now that I’ve said that, I’m guessing about 75% of our readers are reaching for their mouses to move on with their web surfing. But hold your horses! Our bro IntoTheDarkness has listened to just about every deathcore release known to the civilized and uncivilized world, and he dismisses much of it as formulaic, no-talent crapola. But he said No Mercy was bamf. So there must be something here. So I’m listening to it. What do I hear?

Down-tuned, palm muted, hardcore guitar rhythms. Check. Jackhammer drumming, heavy on the blast beats and double bass.  Check. Roof-collapsing breakdowns that you can feel in your lower GI. Check. A combo of deep-throated death metal growling and vicious, demonic shrieking (often double-tracked in unison). Check. Lyrics? Yes, they have them. Enough said about that (who listens to deathcore for lyrical content?) But wait, there’s more — isn’t there? (don’t give up — continue reading after the jump . . .) 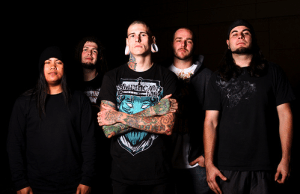 Yes, there seems to be more. Some of the songs feature actual guitar solos or almost melodic runs, which is a nice touch. And most of the songs include some compulsively headbangable riffs. And the musicians play their instruments quite competently. The overall tone is angry, pummeling, doom-laden, nasty — you know, like the album title says, “no mercy, no forgiveness.” And this is fun to listen to, if you like deathcore.

Which it happens we do. But if you’ve been reading this site regularly, you know that. We don’t have our noses in the air about deathcore. Doesn’t mean we like all of it (a lot of it is indeed formulaic, no-talent crap). But when it’s done right, it definitely appeals to us at a visceral level.

And mostly, Suffokate does it right.

Is it “formulaic”? Yes, in the same sense that like many extreme metal bands (and bands in every genre), Suffokate has defined their music by reference to musical antecedents that are well-known and that were originally established by someone else (e.g., “death metal,” “melodic death metal,” “black metal,” and so on).

We always look for music that’s out of the ordinary, that expands the genre even if it doesn’t completely break the mold, that exhibits really original songwriting talent as well as head-turning execution. But sometimes, it’s also satisfying to hear a band that plays a kind of no-frills music you like when you’re in a certain frame of mind, and competently gives you what you expect, even if it gives you nothing more than that.

And basically, that’s what IntoTheDarkness wrote me when I pressed him for more elaboration on his “bamf” review: “Nothing is really above average about Suffokate — they are just deathcore done right. Nothing special or unique, but they are fun and they are good at what they do.”

Is that enough? Are we too easily pleased?  Well, decide for yourself. Here’s a track from No Mercy No Forgiveness:

Suffokate: The Power of Submission